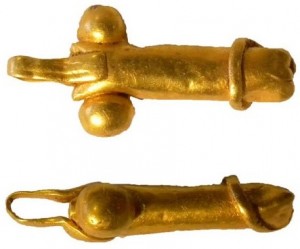 A gold pendant in the shape of a phallus has been declared officially treasure by Norfolk coroner William Armstrong at a treasure trove inquest at Lynn County Court on Monday. It was found by metal detectorist Kevin Hillier on January 30th. He reported the wee gold pen0r as possible treasure to the Portable Antiquities Scheme, and now the inquest has confirmed its status. (Any found gold and silver objects over 300 years old must be reported to the authorities under the Treasure Act.)

According to Erica Darch, a Finds Liaison Officer from Norfolk, the pendant is:

“hollow, formed from sheet metal soldered together lengthways, rounded at the terminal with a small aperture left open at either end. A loop formed from triple ribbed sheet is soldered into position at the top, with separately applied solid globular testicles to either side. Separately applied wire with irregular transverse grooves on the underside (perhaps to act as keying for the solder) defines the edge of the foreskin.”

There is no native English tradition of phallus-worship, so this piece most likely belonged to a Roman soldier. Other phallus amulets have been found in areas with a Roman military presence, but most of them are bronze. A gold one is a rare find.

Phallic pendants in ancient Rome were talismans used to ward off the evil eye. The phallic deity was called Fascinus (from “fascinare” meaning “to cast a spell” which is the root of our word “fascinate”) and the charms and amulets shaped like penises and testes were worn to invoke his protection against evil spells. This kind of sorcery was thought to be caused primarily by envy, aka “invidia,” and was targeted against other people’s greatest fruitfulness: the fertility of animal, crop and person. Phallus pendants were thus often given to babies and children to avert curses intended to blight their growth, and a large phallic image was carried to crossroads in the countryside outside of Rome, then through the city proper during the March Liber Pater festival to protect newly-planted crops.

The phallus also had an official role in Roman state religion. The Vestal Virgins tended the fascinus populi Romani, the sacred phallic image that ensured the safety of the city, along with the sacred fire of Vesta. The sacred phallus was the masculine counterpart of the female generative power represented by Vesta’s hearth. The Vestals were also responsible for attaching a phallus to the bottom of a triumphing general’s chariot to ward off any invidiousness directed his way.