The Capitoline Venus, a larger than life-sized Roman nude of a Venere Pudica, or modest Venus after her pose that graciously covers her lady bits, will go on display at Washington, D.C.’s National Gallery of Art starting this coming Saturday through early September.

Gallery Director Earl A. Powell III called it a “once-in-a-lifetime opportunity” to see the piece in the United States. It will have a prime spot as a museum centerpiece for the busy summer months.

“The ‘Venus’ will feel right at home in our West Building Rotunda, which was designed by John Russell Pope and was based on the Pantheon in Rome,” Powell said in a written statement. […]

The exhibit is part of an effort by Rome Mayor Gianni Alemanno to display masterpieces in the United States between 2011 and 2013. It also marks the 150th anniversary of Italy’s unification as a single state.

This is the first time the Venus has ever been loaned since it was discovered under the gardens of the Stazi family estate on the Viminal Hill in the 1670s. In 1752 Pope Benedict XIV bought it from the Stazi and donated it to Rome’s Capitoline Museum. Forty-five years later, Napoleon invaded Italy. Under the terms of 1797’s Treaty of Tolentino, French officials were allowed to confiscate any work of art they wanted no matter who owned it. All they had to do was walk in and claim it. The Capitoline Venus was one of the confiscated works. The Venus went to the Louvre, leaving Rome for the first time against her will.

After Napoleon’s defeat at Waterloo, the Treaty of Vienna guaranteed the return of confiscated Italian and German art so the Venus made her way back to Rome in 1816. Since then, it has remained safely ensconced in its own niche in the Palazzo Nuovo on the Capitoline hill.

The Capitoline Venus is one of the best preserved statues from antiquity ever discovered. She was found almost entirely intact, missing only her nose, a few fingers and a hand that was later reattached. She’s a Roman copy of a 3rd or 2nd century statue, now lost, that was itself a derivative of Praxiteles’ revolutionary Aphrodite of Cnidus, the first life-sized female nude.

The Cnidian Aphrodite had only one hand obscuring her mons and it’s casually posed as if captured mid-gesture. The Capitoline Venus affects that pose but then also drapes her other arm over her breasts. It does quite a poor job of obscuring them, of course, but it’s a more protective overall posture. The Cnidus Aphrodite is more comfortable with her nudity. Although Praxiteles’ original is lost, the Colonna Venus, now in the Vatican Museums, is widely considered the most accurate extant copy. Here she is, for comparison’s sake: 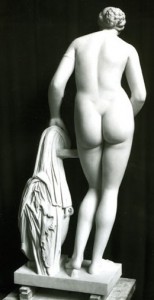 5 thoughts on “Capitoline Venus on loan for first time ever”