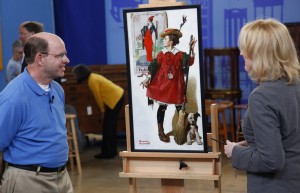 Antiques Roadshow was in Eugene, Oregon this weekend, where experts appraised an original oil painting by Normal Rockwell at half a million dollars, an estimate that ties for the second highest appraisal in the US Roadshow’s 15 year history.

(The top estimate in AR history was $1,000,000 for a group of 18th century Qianlong carved jade and celadon pieces brought to Raleigh, North Carolina in 2009. They ended up selling at auction for under $500,000. The tie for second went to a 1937 Clyfford Still oil painting brought to the Roadshow in Palm Springs, California in 2008.)

John Jordan, the show’s publicist, said he could not reveal the identity of the painting’s owner but confirmed the person lives in the Springfield area.

The artwork is a 1919 original oil-on-canvas painting by Rockwell titled “The Little Model” that was used on a cover of Collier’s magazine. The painting depicts a girl with a dog, posing in front of a fashion poster. The owner told appraiser Nan Chisholm, of Nan Chisholm Fine Art in New York City, that the painting had been in the family for at least 90 years after Rockwell gave it to his great-grandmother.

The three Eugene episodes, including the one starring the Rockwell piece, won’t air until next year. PBS will announce the schedule this September.

Rockwell’s career as a commercial artist was still young in 1919. His first painting to grace the cover of a magazine was “Scout at Ship’s Wheel,” published in the Boy Scouts of America magazine Boys’ Life in September of 1913 when Rockwell was just 19 years old. He was the art editor for Boys’ Life at the time and made several more covers for the publication during his three-year tenure in the position.

When he was 21, his roommate, cartoonist Clyde Forsythe, introduced him to The Saturday Evening Post editor George Horace Lorimer. Lorimer liked what he saw and immediately purchased two of Rockwell’s cover paintings and commissioned three more. His first cover illustration for the Post, “Mother’s Day Off,” was published in May of 1916. Seven more cover paintings followed in quick succession within the next 12 months. Rival publications quickly lined up to score a Rockwell cover of their own, including Collier’s Weekly which had less than half the Post‘s readership. 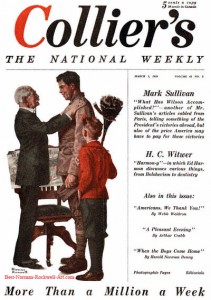 Rockwell published four covers for Collier’s in 1919. The first was “War Hero Job Hunting,” published on the March 1, 1919 issue. Despite his popularity, Rockwell had a difficult time getting this piece published and only turned to Collier’s once the larger circulation magazines had turned it down. Lorimer’s Post was a conservative magazine, whereas Collier’s Weekly had made a name for itself in the early 1900s for publishing muckracking series by Upton Sinclair on the Chicago meatpacking industry and by Samuel Hopkins Adams on patent medicines, among other topics. The Collier’s stories caused a furor and were instrumental in the passage of the Pure Food and Drug Act in 1906.

Norman Rockwell’s first Collier’s cover illustration depicts a uniformed World War I veteran being welcomed home by his father and little brother. I’m not sure why it was controversial enough to get rejected by the bigger magazines. The war wasn’t officially over yet — the Versailles Treaty would officially end the war on June 28, 1919 — but armistice had been declared on November 11, 1918, so troops were already coming home and looking for civilian work. Maybe they thought the title implied something malicious, like the war hero is a slacker, or that it described a social problem of veteran unemployment?

“The Little Model” was his second Collier’s cover, published on March 29, 1919. Again, I don’t know why the Post didn’t want that one. Maybe because the young girl with her shredded wrap, torn seams and holes in her stocking holding a broom suggests a harsh reality of child labor/poverty that contrasts with the elegant Erté-style model she’s imitating? That’s more of a Collier’s topic, certainly, but it’s such a sanitized, innocuous depiction I can’t quite grasp why even Lorimer would object to it.