You’d think finding ancient jewelry would be a relatively common occurrence in a city as ancient as Jerusalem, but in fact, such finds, especially of Roman-era jewelry, are extremely rare because Titus razed the city in the late first century AD, and in the many invasions that followed these sorts of delicate artifacts were often destroyed, sold away or melted for the gold value.

That’s why this beautiful gold, pearl and emerald earring dating from the time of Christ is so remarkable a find. It’s in in astonishingly good shape, too. It looks like something you’d see in a Cartier window. 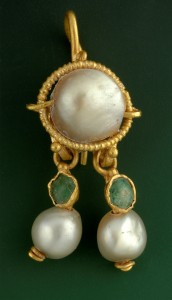 The piece was found in a Byzantine structure built several centuries after the jeweled earring was made, showing it was likely passed down through generations, he said.

The find is luxurious: A large pearl inlaid in gold with two drop pieces, each with an emerald and pearl set in gold.

“It must have belonged to someone of the elite in Jerusalem,” Ben-Ami said. “Such a precious item, it couldn’t be one of just ordinary people.”