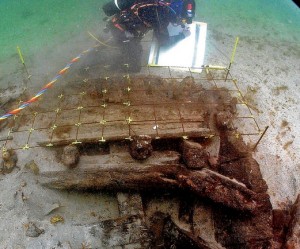 A dive survey of a shipwreck discovered in the shallow waters of Burtonport harbor off the coast of Donegal, Ireland, has discovered evidence that the ship was once part of the mighty Spanish Armada that so spectacularly failed to invade England in 1588. The divers found lead shot balls, tunic buttons and Spanish pottery in the hull of the ship. The timbers and copper pins date the ship wreck to the 16th century.

The ship was discovered by Donegal divers Liam Miller, Oscar Duffy and Michael Early almost three years ago but was not publicized to give the underwater archaeologists time to survey the area without interference. There is still a great deal of work to be done in order to identify the vessel as an Armada warship, but the archaeologists surveying the find and the Heritage Ministry believe the find is a major historical significance.

Heritage minister Jimmy Deenihan has granted 50,000 euro for the excavation by the underwater archaeology unit from his department’s National Monuments Service.

He said the discovery was a major find of significance not only to Ireland but also to the international archaeological, historical and maritime communities.

“If, in fact, it proves to be an Armada vessel, it could constitute one of the most intact of these wrecks discovered to date,” he said.

“It could provide huge insight into life on board and the reality of the military and naval resources available to the Armada campaign.”

The 130-ship strong Spanish Armada was defeated by the wee English navy of 60 ships and the treacherous waters of the North Sea. After the English sent fireships into the Spanish fleet, the wind forced the Armada to flee north. The rocky coasts of Ireland and Scotland and the reliably abysmal weather did far more damage than the fireships. Less than 75% of the Spanish Armada made it home.

Between 24 and 26 Spanish Armada ships are thought to have gone down off the Irish coast. Fourteen of them have been found and mapped thus far, five of them off the coast of Donegal.