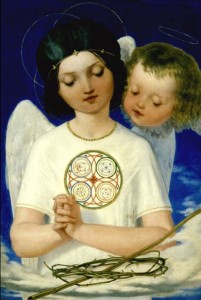 Ford Madox Brown first displayed The Seraph’s Watch at the British Institution for Promoting Fine Arts exhibition in 1847. The painting depicts two cherubic, well, cherubs gazing lovingly at Christ’s crown of thorns and the rod used to scourged him. It sold to a collector by the name of Cook or Cock. The last time it was seen in public was at the Arts and Crafts Exhibition Society 1896 London exhibition, then it disappeared into the ether. Now, 115 years later, it’s been found in a private collection and is going on display again at the Manchester Art Gallery for their Ford Madox Brown retrospective next month.

The painting made a big impression at the time on Dante Gabriel Rosseti, the founder of the Pre-Raphaelite movement. In a letter to Madox Brown written in early 1848 (the same year Rosseti, John Everett Millais, and William Holman Hunt founded the Pre-Raphaelite Brotherhood) Rosseti wrote glowingly about The Seraph’s Watch and other works asked if he could study under him. Ford Madox Brown agreed to take him on as a pupil and assigned him The Seraph’s Watch as his first homework. Rosseti’s unfinished copy was also in private hands for years, but it was tracked down in 1971 and sold at auction in 2006 for £106,850 ($173,000).

That copy is the reason Julian Treuherz, Victorian art expert and curator of the Manchester Art Gallery Madox Brown exhibit, even knew what the original looked like when he found it in a private collection two years ago.

“When I saw the painting I knew instantly what it was. It had been regarded as lost but we all knew what it looked like from the copy made by Madox Brown’s pupil, Dante Gabriel Rossetti,” Treuherz, an expert in Victorian art, told Reuters.

“The amazing thing was that it was absolutely fresh. It had not suffered in any way and was in fantastic condition, which is important because Madox Brown was fond of repainting his earlier works in later styles,” he said.

The exhibition, Ford Madox Brown: Pre-Raphaelite Pioneer, is the first major retrospective of the painter’s work in more than 50 years. It focuses on the artist as a Pre-Raphaelite, a movement he was deeply involved with even though he declined Rosseti’s invitation to join the Pre-Raphaelite Brotherhood in order to retain his artistic independence, and includes his two greatest masterpieces, Work (1852 – 63) and The Last of England (1852 – 55), notable for their realistic, unsentimental depiction of social problems, unique in Victorian art.