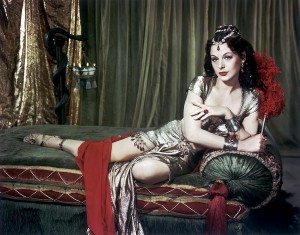 Sixty-nine years ago today, US Patent Number 2,292,387 was issued to George Antheil and Hedy Kiesler Markey for a secret communication system that used frequency hopping — a signal broadcast over multiple constantly switching radio frequencies which can only be heard by a synchronized receiver — to radio-control torpedoes. George Antheil was an avante-garde pianist and composer whose Ballet Mécanique, a score for a Dadaist movie that used 16 player pianos in four parts, two regular pianos, three xylophones, seven electric bells, three propellers, a siren, four bass drums, and a tam-tam, had caused a riot at its Paris première in 1926. Hedy Kiesler Markey was the real name of screen siren Hedy Lamarr, who, as it happens, was also some kind of math/engineering genius.

Antheil was also a self-taught expert on endocrinology who had published a well-respected work on the subject. It was his biological know-how that first inspired Lamarr to seek him out. In 1940 they were both at a dinner party in Hollywood when she approached him to discuss glandular methods of breast augmentation. Somehow during the course of that conversation — and it’s probably best not to delve — the subject shifted to radio controlled torpedoes.

Radio control already existed, but the signal was highly susceptible to detection and jamming. Lamarr’s frequency hopping idea solved the problem of interference with long-range radio signals. A hopping signal sounds like random blips to a third-party listener. The worst someone without a synchronized receiver could do was to jam a bit of the signal, not the whole series. Altheil suggested a mechanism that would synchronize the frequency switches based on the way he had coordinated all of those player pianos in the Ballet Mécanique. 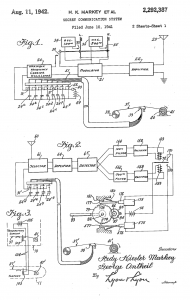 A year and some work with an electrical engineering professor from the California Institute of Technology later, on June 10, 1941 they submitted the design to the Patent Office, complete with slotted paper rolls inspired by player piano rolls and 88 frequencies, the number of keys on a piano. US Patent Number 2,292,387 – Secret Communication System was granted on on August 11, 1942.

Antheil pitched the device to the US Navy, but they were skeptical of the roll mechanism.

Navy brass were unimpressed, dismissing the invention as too bulky to fit inside a torpedo. Antheil’s arguments to the contrary were ignored, and he said later that comparing parts of the invention to the fundamental mechanism of a player piano in front of a bunch of naval officers had probably been a mistake.

The newly formed National Inventors Council was skeptical as well, telling Hedy Lamarr she’d do better to sell war bonds than secret weapons systems. She did, too, selling millions of dollars worth of war bonds, $7,00,000 million at just one event.

The lack of interest in their visionary invention persisted well into the next decade until Sylvania Electronic Systems dusted it off in 1957. They used electric switches rather than piano rolls and within five years, three years after the patent expired, the new frequency hopping device was installed on ships blockading Cuba during the 1962 Missile Crisis.

Lamarr’s and Antheil’s invention is the basis of today’s spread-spectrum communication technology widely used in wireless networks, cellphones, satellites. Her contribution was overlooked by the technology-consuming public until the Electronic Frontier Foundation gave Hedy Lamarr a special Pioneer Award in 1997.

EFF Staff Counsel Mike Godwin, who serves on the Pioneer Awards’ panel of judges and who has coordinated the Awards event for four of its six years, said his organization regards both Lamarr’s contribution and the general public’s “nearly absolute ignorance about it” to merit special recognition for Lamarr as well as for late George Antheil, who, working with Lamarr more than half a century ago, developed and patented what is now known as spread-spectrum broadcasting. Communications experts say that one of the chief benefits of spread-spectrum broadcasting is the access to the airwaves it will give ordinary people with ordinary resources. Only recently has the promise of spread-spectrum technologies begun to be affordable — this is due to the recent development of inexpensive computers, Godwin said, adding that the amount of mathematical calculation one had to do in the pre-microcomputer era to implement spread-spectrum broadcasting made such broadcasting “a practical impossibility most of the time.” […]

“The special award for Lamarr and Antheil is remarkable for other reasons besides its recognition of a woman whose contributions were thought to be solely in the field of entertainment,” Godwin said. Partly this is because Lamarr and Antheil had hoped that the military applications of their invention would play a role in the defeat of Nazi Germany. “Ironically,” Godwin said, “this tool they developed to defend democracy half a century ago promises to extend democracy in the 21st century.”