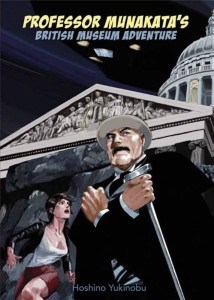 Professor Munakata’s British Museum Adventure was published in Japan last year, and now it’s finally been translated into English for the rest of us.

Hoshino’s work is blend of science fiction and thriller, layered with a rich mix of western and Asian myth and history. […]

Munakata is also well-versed in the debate surrounding disputed objects such as the Parthenon marbles, the Rosetta stone, and the Benin bronzes. Meanwhile, the Lewis chessmen are key players in the story.

Munakata is against repatriating these objects, praising the British Museum’s history of collecting, and fostering public access. “I am one of many Japanese scholars,” he says, “who have benefited from that generosity.”

Other parts of the story are less cerebral. With Tintin-like sleuthing, the professor foils a bomb threat at St Paul’s Cathedral with megaliths hoisted from Stonehenge. At the British Museum he defeats a looter bent on destruction with a bulldozer.

The graphics are a stylish black and white and feature a series of ten episodes in which the Professor interacts some of the museum’s most famous artifacts like the Lewis Chessmen and the Rosetta Stone. 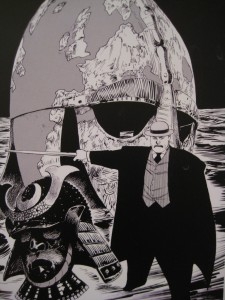 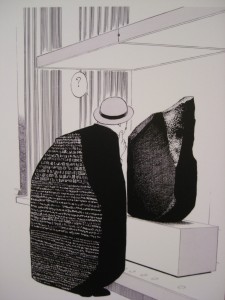 Professor Munakata’s British Museum Adventure was supposed to be available for sale on May 2 of this year, but there’s been some delay because it’s still listed as a pre-order on Amazon UK with no notice of when it’ll be shipped. In the US, Amazon doesn’t even offer it as a pre-order yet, but it says the publication date is October 31, 2011. You can sign up to be notified when it becomes available.

4 thoughts on “British Museum gets in the manga business”