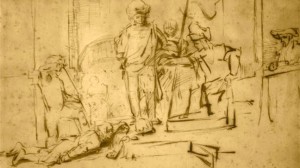 A drawing by Dutch master Rembrandt van Rijn stolen from an LA-area hotel Saturday night was found Monday night in the pastor’s office of Saint Nicholas of Myra Episcopal Church in Encino. The 11-by-6-inch ink drawing was on display in the hallway of the Ritz-Carlton Marina del Rey as part of an exhibit sponsored by the Linearis Institute which owns the piece. It was placed on an easel, not hung on a wall or fixed to the spot in any way.

The thieves took advantage of this setup to run a classic distract and grab. A “hotel guest” who seemed interest in purchasing one of the artworks on display distracted the curator and an accomplice yoinked the Rembrandt while his back was turned. The heist took all of 15 minutes, between 9:20 and 9:35 P.M.

The return of the purloined drawing was just as stealthy. On Monday night, an assistant priest at Saint Nicholas left the pastor’s office for a few minutes, leaving the door propped open. When he returned, there was a Rembrandt in the room. He notified the pastor, Reverend Michael Cooper, who in turn notified the police.

“Somebody may have driven by and seen the lights,” Cooper said in an interview.

Cooper, a former L.A. County Sheriff’s deputy who still serves the department as a volunteer chaplain, said he called authorities after his staff informed him of the discovery.

“The door was unlocked and propped open,” he said, adding his parishioners “had nothing to do with it.”

Asked to explain why a thief would leave a stolen picture at St. Nicholas’, he replied, “We are a church. It is a place of reconciliation.”

It’s rather nice to see thieves today respecting the principle of ecclesiastical sanctuary. It’s so old-timey.

The drawing, made by Rembrandt around 1655, is titled “The Judgement” and depicts a court scene with a judge pointing judgmentally at a man (a thief, perhaps?) prostrate on the floor before him. The Linearis Institute has examined the recovered work and confirmed that it is their missing Rembrandt.

Rembrandt is the second most popular art theft target after Picasso. According to Anthony Amore, chief of security at the Isabella Stewart Gardner Museum in Boston, locus of the worst art heist of all time when in 1990 thieves broke in and stole 13 old master paintings including three Rembrandts, there have been 81 known thefts of Rembrandt pieces just in the past 100 years.

Listen to a fascinating interview with Mr. Amore (transcript here) wherein he discusses his recent book on the topic, Stealing Rembrandts: The Untold Story of Notorious Art Heists: