The 5.8-magnitude earthquake that struck Virginia yesterday caused some damage to historical monuments in Washington, D.C. The Washington Monument, the National Cathedral and the Smithsonian Castle have all been closed for the time being as experts assess the full extent of the damage. So far it appears that none of the buildings have structural damage but the jury is still out, and even little bits and pieces of decorative masonry could harm visitors if it falls on them.

That’s not an outlandish prospect, either. A finial atop one of the four main spires (known as pinnacles) on the roof of the Washington National Cathedral broke off and plummeted to the ground, embedding itself into the grass. Two other pinnacles lost their finials and the last remaining one was knocked askew. A number of smaller spires and carved angels are cracked and broken.

Cathedral officials said they need to check and stabilize the hundreds of limestone angels and smaller spires and other figures on the cathedral’s exterior to ensure that nothing falls. Three days of events around the anniversary of the Sept. 11, 2001, attacks remain scheduled to go forward.

Details of a repair budget were not immediately known. The cathedral has recently undergone a period of intense budget-cutting. Several years ago, its staff was cut from 170 to 70 and spending was slashed in half after its endowment plunged amid the economic slowdown. An official said Wednesday that the last year has seen strong fundraising.

They’re going to need every penny they can get. The cathedral was not insured against earthquakes, what with it being in Washington, D.C. and all, and repairs are certain to run into the millions of dollars.

The Washington Monument is cracked. There’s a four foot-long, one inch-wide crack on one of the facets of the pyramidion, the small pyramid that tops the obelisk, and today engineers found more small cracks at the top of the 555-foot monument. Again, the damage does not appear to be structural — the rumors that the obelisk was leaning are false — but repairing the tallest obelisk in the world is always a challenge. The National Parks Service has enlisted engineering experts who specialize in earthquake damage assessment and historical architecture to examine and restore the monument.

The Smithsonian museums are all open today after they were found undamaged. The Smithsonian Institution Building, aka the Castle, the original home of the Smithsonian museum which now houses an information center and administrative offices, is the only Smithsonian-associated structure that remains closed to the public and to staff. Five of its iconic turrets sustained “significant damage,” according to officials, and they are working to ensure they aren’t damaged further by the impending arrival of Hurricane Irene.

And now, here’s a picture of two bison who lived in a paddock in the South Yard behind the Smithsonian Castle between 1887 and 1889 when there were almost none left in the wild. 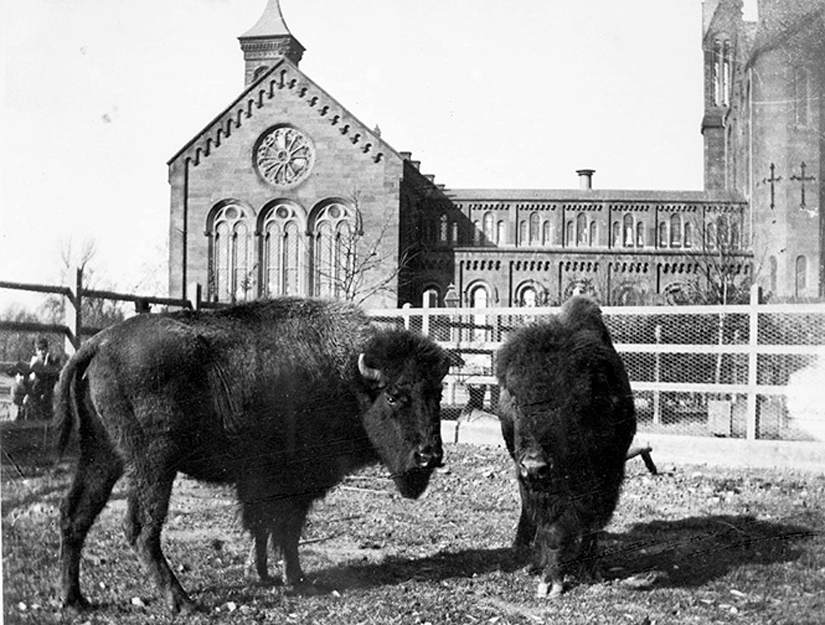