Karen Abbott of Smithsonian’s Past Imperfect blog has written a fascinating entry about Mrs. Mary Grace Humiston, a lawyer turned private eye who solved crimes in the early 1900s, and her most celebrated case, the murder of Miss Ruth Cruger.

Ruth was just 18 years old when she disappeared on February 13, 1917. Her sister Helen found out the next day that she had stopped at a motorcycle repair shop to have her skates sharpened. The owner of the shop, Italian immigrant Alfredo Cocchi, had been suspiciously absent from the store earlier in the day, but when the Crugers told the police, they insisted he was a “respectable businessman” and just glanced around the cellar instead of search the premises thoroughly. Cocchi hastily left the country and returned to Italy. 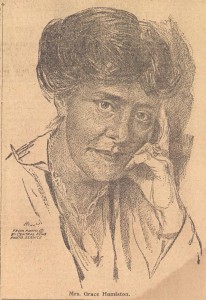 Ruth’s father Henry Cruger hired the formidable Grace Humiston to pursue the case. Grace was born into a wealthy New York family and graduated from Hunter College in 1888, 22 years before Virginia O’Hanlon of “Yes, Virginia, there is a Santa Claus” fame did. She taught for a short while then enlisted in night classes at New York University Law School. The Dean was so impressed with her talents that he suggested she take day classes and well. She followed his advice and graduated in 1904, a year early.

She passed the bar the next year and founded the People’s Law Firm, a firm that specialized in providing legal services for people who could pay very little. Legal Aid only took on completely indigent clients, so the poor were often prey to fraudulent “lawyers” or ones who were too incompetent/drunk to get better paying clients. The People’s Law Firm was an immediate success.

On the pursuit of several missing girls whose relatives had engaged her services, she went to Alabama and infiltrated the notorious turpentine camps under a variety of disguises looking for the missing and seeing for herself the slave labor conditions entire families worked under. Agents lured poor minorities and immigrants to the camps with the prospect of decent pay, then left them behind to be imprisoned, beaten, held at gun-point and forced into greater and greater “debt” thanks to company store schemes. After her perilous year-long investigation, Grace assisted Attorney General Charles Bonaparte in prosecuting the owners of these hell holes.

Several other of her cases made the new news. She traveled all over the world busting agents who promised emigrants to the US a bright future only to steal their savings and leave them destitute in a new country. She was also personally responsible for the pardon of an Italian woman convicted of murdering her abusive husband, and the retrial and acquittal of a man who had been wrongfully convicted of murder and was on death row at Sing Sing. So when the Crugers hired her, she was already well-known as a badass.

Humiston spent 15 hours a day on the case, working pro bono, interviewing Harlem residents who might have noticed suspicious activity around Cocchi’s shop. One man recalled seeing Cocchi emerge from his basement around midnight on February 13, covered with dirt and appearing “nervous.” Another spotted Cocchi the following night, again “dirty and nervous.” On this evidence, Humiston went to Cocchi’s shop, determined to get into the cellar.

Cocchi’s wife appeared at the door wielding a brick. “I’ll split your skull with this brick if you try to come in here,” she said.

Humiston reported the threat to Police Commissioner Arthur Woods, who granted her a search permit. On June 16, she enlisted the help of Patrick Solam, a close friend of the Cruger family and the general foreman for Grand Central Terminal. Solam started in the main basement room, directly beneath the shop. A cluster of benches, toolboxes and chests of drawers created a triangular work area. Solam noticed that one chest along the southeast corner of the room slanted slightly, protruding an inch beyond the others. He asked two assistants to help move it.

Underneath they found broken concrete. After much digging, they found the body of Ruth Cruger, still wearing the clothing she was last seen in, ankles bound, ice skates covered in blood. She had been killed by a blow to the back of the head and then her abdomen slashed with her own skate. Her father identified the body from the graduation ring she was wearing.

Italian authorities refused to extradite Cocchi, but he was arrested, tried and convicted of Ruth Cuger’s murder in Bologna. He confessed to the crime:

“I had never seen Ruth Cruger before she came to my shop to have her skates sharpened,” he said. “From the very beginning Ruth did all in her power to attract my attention. I felt something strange when her dark, penetrating eyes fixed on mine. I was still more disconcerted when she came again to get her skates. An overpowering attraction for the young woman seized me. What happened afterward seems like a dream.”

Grace found out that the corrupt police officers had had a kickback deal with Cocchi which is why they didn’t search his shop properly.

The case was widely reported all over the country. The nice lady lawyer, scion of a wealthy high society New York family, who believed that keeping a home was far more important for a woman than a career even as she worked 15, 16 hour days to solve the case of a missing pretty young white girl, made for great copy. The Holmes comparisons were immediately rife. Humiston herself, however, rejected them. She bluntly told the New York Times:

“No, I never read Sherlock Holmes. In fact, I am not a believer in deduction. Common sense and persistence will always solve a mystery. You never need theatricals nor Dr. Watsons if you stick to a case.”

This was a big thing for her. Despite Cocchi’s creepy psycho explanation for the murder, Grace was convinced that Cocchi was involved in a white slavery scheme, that he had intended to force Ruth into prostitution only to have the plan go awry. She formed the Morality League of America to seek out missing girls and women presumed to have been abducted for the purposes of prostitution, and put her police powers to use in support of it.

It was her fixation on white slavery that ultimately led to her downfall. In November of 1917, she announced at a Women Lawyers Association dinner that she had discovered 600 pregnant unmarried young women at the U.S. Army’s Camp Upton, and that seven of them were already dead. Her announcement caused a furor. The Army strenuously denied the existence of hundreds of pregnant slave hookers at Camp Upton, and when pressed, Grace could not furnish any solid evidence of her allegation.

In December, Commissioner Woods revoked her police powers. Two years later she would herself be arrested on the likely spurious grounds of running a dance hall without a license. The dance hall in question was the Manhattanville Be Kind Club, a club Grace had started for youths to do wholesome things together — including dancing, on occasion — and to serve as a day care for working mothers. A judge threw out the charges.

As time passed her fame faded, to the point that by the 1950s, she was Stalined right out of her most famous case, her name and gender changed in articles and books about the Ruth Cruger murder.