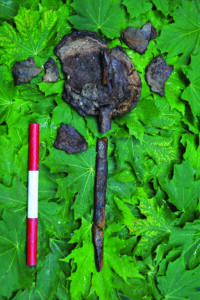 Archaeologists excavating a Stone Age lake bed in Motala, Sweden, have unearthed two skull impaled on spikes. The skulls were discovered with the stakes still firmly embedded inside them, reaching from the base of the skull to the top of the cranium.

Other remains were also found at the site, among them skull fragments from 11 people of varying ages and animal bones. Radiocarbon dating confirms that all of the bones are the same age: 8,000 years old. That makes these heads on spikes the oldest ones found in the world, and by a lot.

The lake bed, a shallow lake during the Neolithic, was used as a ceremonial burial ground during the Mesolithic era.

“One thought is that it was part of some sort of secondary burial ritual where the skulls were removed from dead bodies that had initially been placed elsewhere,” said Hallberg.

“After the soft tissue had rotted away, the skulls were removed and placed on the stakes before being placed in the shallow lake.”

Another theory is that the mounted skulls are trophies brought back from battles with other settlers in the area.

“It may have been a way to prove one’s success on the battlefield,” Hallberg explained.

DNA and isotope analysis might help fill in some of the blanks, like if everyone in buried on the site was related or if they were raised in the area or came from elsewhere. If they’re all part of the same family, it seems unlikely that the impaled skulls were battle trophies.