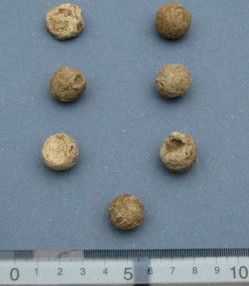 Archaeologists doing a survey of an English Civil War site in Newbury, Berkshire, have unearthed seven bullets from the First Battle of Newbury, a battle between the Royalist army led by King Charles and Parliamentarian force commanded by the Earl of Essex held on September 20, 1643. The team was doing exploratory work on Essex Street before sewer and water company Thames Water replaced a century-old cast iron water pipe in the area. They discovered the bullets in an adjacent field.

Mike Lang Hall, an archaeologist for Optimise, which is working on behalf of Thames Water, said: “This has been a very exciting find and it really is quite rare to find a collection of bullets like this dating back so many centuries in such an urbanised area.

Most of the bullets are consistent with use of a carbine rifle, a weapon that would have been a popular choice in the First Battle of Newbury, which we know took place on this street in September 1643.

The number of bullets in such a small area reflects the ferocity of the fighting – it is reported that sixty cartloads of dead were taken into Newbury for burial after the battle, in addition to those buried on the battlefield.”

The artifacts are now being studied at the Archaeological Surveys’ headquarters near Chippenham. So far they’ve confirmed that the bullets were probably shot from a carbine rifle and that all seven of them made contact with something solid at high speed. That something solid could have been topographical (ie, a tree) or anatomical (ie, a solider). Despite this and their advanced age, the bullets are in good condition, albeit misshapen from the impact.

The First Battle of Newbury was an important turning point in the First English Civil War. Up until then the Royalists had been winning, but even though King Charles had cavalry and got to the location first thus having his pick of the terrain, his soldiers were poorly trained and low on ammunition. Essex defeated all the King’s horses with mass infantry attacks and after a long, bloody day of fighting, the King beat a retreat under cover of night leaving Essex a clear path to take London.

The Royalists never recovered. Essex was welcomed by cheering crowds when he marched into London. They took the bull by the horns and parlayed that Parliamentarian fervor into prompt signature of the Solemn League and Covenant with Scotland on September 25, 1643. By January of 1644, Scotland would send an army to fight against King Charles.

With Scottish help, Parliamentary armies inflicted a string of defeats on the Royalists until King Charles surrendered to the Scottish army in May of 1646. They kept him for a year then handed him over to the Parliamentarians who expected him to accept the constitutional monarchy deal they offered. They did not expect him to cut a turncoat deal with the Scots himself so that in 1648 Scottish troops would yet again come south, only this time fighting for the King, and most importantly to them, to establish Presbyterianism in England. (Spoiler: the Scottish were as unsuccessful the second time as they had been successful the first. The King lost the Second Civil War too and his head with it.)

The bullets are still being examined, but will in due course go on display at West Berkshire Museum.

3 thoughts on “Bullets from English Civil War found in Newbury”