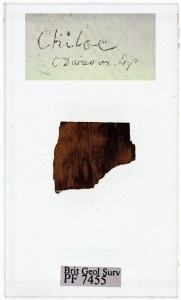 University of London paleontologist Dr. Howard Falcon-Lang was looking through an old cabinet in the British Geological Survey archives for some carboniferous fossil-wood specimens. He opened a drawer labeled “unregistered fossil plants” and found hundreds of glass slides of thin, polished fossil plant sections. He fished out a slide and examined it with a flashlight, finding to his great shock the signature of one C. Darwin, Esq. That slide turned out to be a piece of fossilized wood Darwin had collected during his now-iconic voyage on the HMS Beagle in 1834.

The cabinet contained 314 slides of fossils collected by botanist Joseph Dalton Hooker, Darwin’s best friend who had helped him classify the specimens he had gathered in South America and the Galápagos Islands. Several other slides bear Darwin’s name, and experts think that some of the unlabeled specimens were also prepared by Darwin. 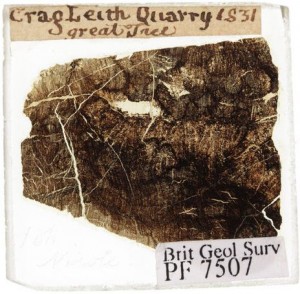 The collection also includes specimens collected by Hooker himself on his travels, pieces from the private cabinet of Reverend John Stevens Henslow, Darwin’s Cambridge mentor and Hooker’s father-in-law, and some very early rock sections made by pioneering geologist William Nicol in the late 1820s. Nicol first devised the technique of affixing a crystal or rock section to a slide then grinding it down until it was thin enough to view through a microscope just a few years earlier in 1815. Some of these slides are huge compared to their descendants today, six inches long and a tenth of an inch thick. 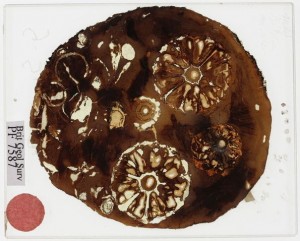 J.D. Hooker had first assembled the slide collection when he worked for the British Geological Survey from February 1846 to October 1847. At that time the Survey didn’t have a formal registration system for its specimens. One would be implemented in 1848 but by then Hooker was no longer in their employ or even in the country. He was traveling through India and the Himalayas, doubtless collecting more specimens, so was not available to help the BGS properly catalogue his own contributions to their archive. By the time he got back in 1851, the BGS was in the process of moving its collection to new offices.

In 1851, the “unregistered” fossils were moved to the Museum of Practical Geology in Piccadilly before being transferred to the South Kensington’s Geological Museum in 1935 and then to the British Geological Survey’s headquarters near Nottingham 50 years later, the university said.

The discovery was made in April, but it has taken “a long time” to figure out the provenance of the slides and photograph all of them, Falcon-Lang said.

A core of 33 important slides from the collection have been photographed and uploaded to the British Geological Survey’s website. More will follow until the entire collection is online.