Girls at that time (and from the 17th century through to the 20th) were taught needlework from a very young age, both in school and at home. They proved their skill, virtue and industry by creating samplers. Early samplers had a utilitarian aspect, teaching girls schoolwork as they stitched things like letters of the alphabet, maps and mathematical tables, but by the 18th century the focus had shifted to a more pictorial approach. Mary’s elaborate design of farm life, featuring symmetrical vignettes of trees, animals, houses, fruit bowls and an elegant lady riding side-saddle is an exquisite example of pictorial needlework. She was the daughter of weaver John Antrim, so she came by her extraordinary skills honestly.

The piece was one of 198 lots from the collection of needlework historian Betty Ring who wrote the definite reference books on the subject and pretty much single-handedly elevated the entire field of folk art needlework with her scholarship and her collecting. Sotheby’s has put her seminal books on the subject, Girlhood Embroidery Volume I, Volume II and American Needlework Treasures online. They are so rich with illustrations even just paging through them is a beautiful voyage of exploration. 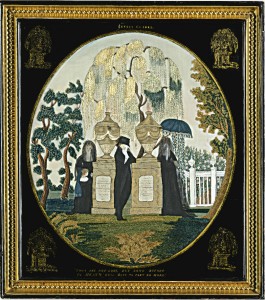 The sale of the Ring collection totaled $4,389,503, over a million dollars above the total estimates, which is particularly remarkable considering that a quarter of the lots didn’t sell at all. Most of the unsold pieces were memorial samplers, depicting veiled mourners, weeping willows and gravestones stitched in memory of a deceased loved one. Interestingly, when Girlhood Embroidery was first published in 1993, it was positively reviewed by The Wall Street Journal (to this day it’s the only book about American decorative arts ever reviewed by the WSJ) and that reviewer was creeped out by mourning pieces. His description of them as “eerily premonitory of Edward Gorey” is supposed to be negative, I suppose, but I think it’s a ringing endorsement. The one pictured on the right, embroidered and painted on silk by Betsey Clarke, at Miss Patten’s School, Hartford, CT, ca. 1809, is one of the ones that didn’t sell. I find it gloriously Gorey-esque.

Sotheby’s press release declares the Mary Antrim sale established a new record sale price for a needlework sampler at auction. It’s not the greatest sale price ever garnered by a young woman’s embroidery, though, so either they made a mistake or they’re defining needlework sampler in a way I don’t understand. The most expensive sampler ever sold is View of Boston Common by Hannah Otis (1732-1801), stitched around 1750. It’s a huge piece, meant for display over a chimney mantelpiece, embroidered in wool and silk on linen canvas. It was purchased by the Museum of Fine Arts, Boston at Sotheby’s in 1996 for a record $1,157,500. 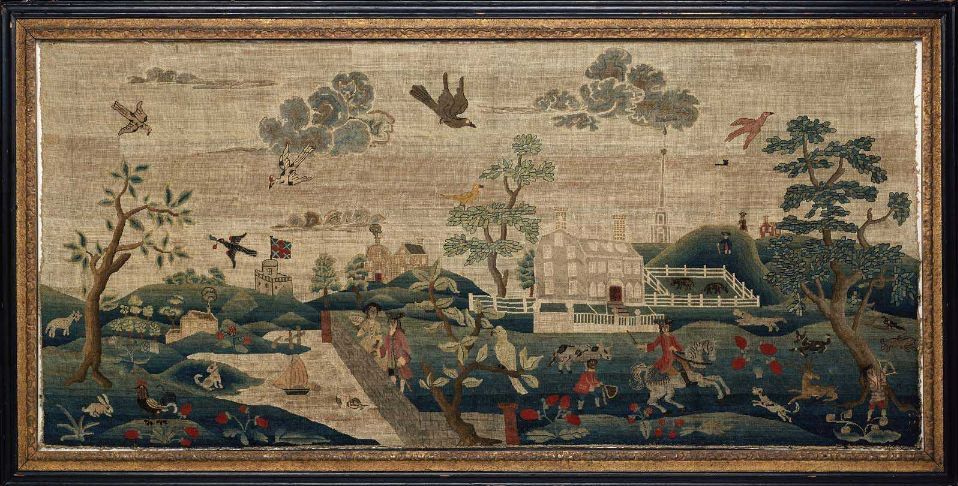 Its historical subject matter drove the price. It captures the Boston Common during the colonial era, complete with British flag flying over the Block House (destroyed in 1761) on the left, the actual beacon on Beacon Hill, and in the middle the Thomas Hancock house with a wealthy young man on his horse accompanied by a black groom in front of it. Thomas Hancock was the father of John Hancock, he of massive signature fame. The young man on the horse could well be John Hancock himself, and the couple on the left his mother and father.

Hannah Otis is closely linked to the American Revolution and American history in general. She was born in 1732, the daughter of Colonel James Otis and Mary Allyne Otis. Her mother was a descendant of Mayflower passenger Edward Doty. Her father was a judge and representative to the Massachusetts legislature. He was a fervent anti-royalist as was his son, James Otis, Jr., who introduced the phrase “Taxation without representation is tyranny” during the Stamp Act debates. Hannah’s older sister Mercy Otis Warren was a poet, playwright and historian who published numerous pro-Revolution writings and corresponded with the luminaries of the American Revolution like John Hancock, Thomas Jefferson, George Washington and John Adams.

The sampler remained in the Otis family until the 1996 sale. It had been on loan at the Boston Museum of Fine Arts for over 40 years when the family decided reluctantly that they had to sell it.

The Museum of Fine Arts, Boston was determined to buy the needlework, which was consigned to Sotheby’s by Martha Gray Otis (b. 1943) and her brother, Samuel Allyne Otis (b. 1940), who felt they could not afford to give it to the museum. “We are happy to have the museum have it; we hated to take it away from them,” said Martha Otis after the sale. “My greatest joy, besides being out of debt, is that the Boston museum has it.”

It was estate planning that drove the Otises to sell the needlework. “We are not wealthy enough to own it and pay inheritance taxes, and now by the time we pay the capital gains tax, we are not talking about a fortune divided between the eight of us,” Martha Otis continued. “I think Hannah Otis, who struggled to support herself, taking in borders and running a shop, would be pleased to know that the monies from the sale of her needlework will give my children and my brother Sam’s children a boost when they need it.”