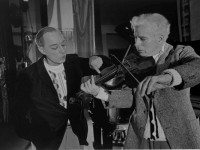 Researchers at the Cineteca di Bologna have discovered a previously unknown manuscript in Charlie Chaplin’s own hand outlining a film about legendary Russian dancer Vaslav Nijinsky. The film was never made, but elements of it were included in Limelight, one of Chaplin’s last films, which featured his only on-screen appearance with that other great luminary of silent picture comedy, Buster Keaton. Four unpublished pictures of Keaton and Chaplin working together on the Limelight set were also discovered.

The Cineteca di Bologna is the custodian of the Charlie Chaplin Archive, an immense collection of Chaplin’s personal and professional documents. For years they’ve been cataloging and digitizing the paper documents and restoring the films in accordance with the wishes of Chaplin’s heirs. They found the manuscript while researching Limelight, appropriately enough, and will announce the find today at their Cinema Ritrovato (Rediscovered Film) festival in Bologna.

You can see the entire manuscript, complete with Chaplin’s strike-throughs and margin notes, in pdf form here. Click here to read the pdf transcript.

Nijinsky met Charlie Chaplin in 1917 during the Ballets Russes dance company’s second and last tour of the United States. Nijinsky hadn’t participated in the first tour in 1916 because company director Sergei Diaghilev had fired him in 1913, furious that Nijinsky, his sometime lover, had married Hungarian countess, groupie and wannabe dancer Romola de Pulszky while on tour in South America, far from Diaghilev’s controlling oversight.

When war broke out in August 1914, Nijinsky, the missus and their newborn daughter were staying in Pulszky’s mother’s house in Budapest. There they stayed for the next two years, under house arrest as enemy noncombatants due to Nijinsky’s Russian citizenship. He was only released because the American promoter of the Ballets Russes’ second US tour stipulated that Nijinsky had to be part of the company, so Diaghilev pulled some strings, enlisting the intervention of Spanish King Alfonso XIII to secure permission for Nijinsky to leave Hungary for New York in September of 1916.

Nijinsky was by all accounts in poor form during the tour. He was out of practice from two years of house arrest and showing early signs of the schizophrenia that would end his career in 1919. He was convinced that the other dancers had it in for him, that they would leave a trap door open on stage for him to fall through. The tour was a financial and artistic disaster. The Ballets Russes never toured the US again.

In the middle of this turbulence, the company visited Chaplin on the set of Easy Street, a classic two-reel film co-starring Edna Purveyance from Chaplin’s productive and lucrative time under contract with Mutual Film. In 1916, Chaplin and Mutual had agreed to a yearly salary of $670,000, making him the highest paid entertainer in the world. They built him a studio of his own and gave him complete artistic freedom. Chaplin was at the peak of his powers when he met the great dancer at the nadir of his.

Twenty years later, Chaplin would write a treatment for a movie about Nijinsky, “the great genious of the Russian ballet,” whose insecurities make him come across as something of a brute, but who is a kind, generous spirit who in secret financially supports the drunken old dancer who almost injured him on stage. From the newly-discovered manuscript:

The theme of the play is that a career is not the fulfillment of man’s desires, but only a road leading to his destiny. Naginsky was inarticulate, sensitive and shy with a funny passion and an imagination that launched his soul, because he had only one means of expressing himself. […]

Characters: Naginsky, His Wife, Degaloff, an Old Friend, Dresser, Old Dancer
Action and the Intention Ballet to show the genius as a dancer. To show his relationship with the members of the company. To show how he intercedes with Degaloff on behalf of one of the members of the cast. To show his sense of justice. To show his loyalty to an old member of the cast who has been drinking because he is too old to dance. To show the old member making a mistake while the ballet is performing. This mistake almost causes N to injure himself and he heaps a tirade of abuses at the old man until he discovers that the old chap is suffering from rheumatism. Then he suggests that the old man should take a rest. The old man is afraid to because he cannot afford the expense of a hospital or the chance of losing his job. When D refuses to pay the old man’s expenses for a two weeks’ rest, N tells him that he will pay it and that he D can deduct the money from his salary. Naginsky But for heaven’s sake, do not tell the old fellow that I am paying the bills. The fool will be too proud to accept it.

It’s the character of the old washed-up alcoholic performer whom Chaplin would reuse in Limelight, which was filmed in 1952, 15 years after Chaplin wrote the Nijinsky treatment. At the time, Chaplin insisted it would be his last film (it wasn’t; he made two more after that), so that young actor in his prime who had met Nijinsky in his decline was now in the waning days of his own stellar career.

Also, Buster Keaton was in dire straits himself when Chaplin hired him for Limelight. He had been financially devastated by a divorce and hadn’t been getting much work. The part was a small one, too small, Chaplin originally thought, for an actor of Keaton’s caliber. When he heard that Keaton had fallen on hard times, he insisted on casting the legend and gave him free rein to create his own routine in their shared scene, something that Chaplin never did.

So the unfilmed Nijinsky manuscript turns out to have several parallels with Chaplin’s later life and work. Chaplin plays the old drunk now, only he’s the one giving a down-on-his-luck colleague a hand in a respectful way. It’s a wheel-has-come-full-circle moment.