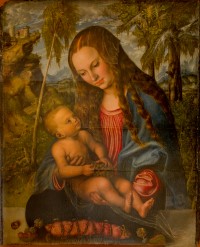 Lucas Cranach the Elder’s Madonna under the Fir Tree is one of the master’s most elaborate and highly prized Madonnas, completed around 1510 for the Cathedral of St. John the Baptist in Breslau, Bohemia (now Wroclaw, Poland). It hung in the Chapel of St. John in the cathedral’s north aisle, a staple of travel guides and art histories, for more than 400 years.

Breslau was part of Germany during both World Wars, and its overwhelming majority-German population supported the Nazi party from the early 30s. To keep it safe from Allied bombing raids, Cranach’s Madonna was taken down and hidden in 1943. First it was moved to a Cistercian monastery, and then to the city of Klodzko 55 miles southwest of Breslau.

The first air attack on Breslau didn’t take place until the Soviet air force struck in July of 1944, and the damage was not extensive. The city basically managed to avoid the war beyond some Polish resistance sabotage until the approaching Red Army laid siege to the city in February of 1945. The church officials who removed the Madonna may have had other concerns as well, namely keeping their Cranach instead of seeing it spirited away to Hitler’s pet art collection project, the Führermuseum in Linz, Austria.

The Siege of Breslau lasted three months, ending on May 6th, 1945, just two days before armistice and the end of the war in Europe.

The city which had survived virtually unscathed during five years of war was reduced to rubble in the last three months of it courtesy of Red Army artillery and Soviet Air Army bombing. The Cathedral of St. John the Baptist was one of the hardest hit buildings with 70% of its construction destroyed. Its aisles, including the north aisle where the Madonna had once hung, were in ruins.

Under the terms of the Potsdam Conference held in July of 1945, Breslau was transferred to Poland and renamed Wroclaw. A mass exodus of its German population followed. Between 1945 and 1949, ethnic Germans either fled the city or were forced out while ethnic Poles were forced in by population transfers from newly annexed Soviet territories.

With this massive dislocation and ethnic conflict as the backdrop, the Madonna was taken out of hiding and brought to the Diocesan Museum in Wroclaw, since returning it to the cathedral was not possible. During its war-time vicissitudes, the painting had been broken horizontally in two pieces, so diocesan officials commissioned Siegfried Zimmer, a priest, art collector and painter, to restore it. Siegfried Zimmer was also German. Between 1946 and 1947, while he restored the Cranach, he had a forgery made. He gave the fake to the diocese and then moved to Berlin with the authentic Madonna under the Fir Tree.

The fraud wasn’t discovered until a Polish conservator examined the painting in 1961 and found a nasty surprise. For decades the Madonna was missing. Rumors of it being sold in the private art collection market popped up on occasion, but the authorities were never able to track it down. Finally the painting found its way into the clutches of, you guessed it, an anonymous Swiss collector who kept it on the down low until his recent death. He bequeathed it to the Diocese of St. Gallen in Switzerland.

In March of this year, Poland’s Ministry of Foreign Affairs’ Office for the Restitution of Cultural Goods found out the Cranach was in St. Gallen and began negotiations to get it back. On Friday, July 27, in an official return ceremony, Minister Radoslaw Sikorski handed the Madonna under the Fir Tree over to Bishop Andrzej Siemieniewski of the Wroclaw Diocese.

“We pass on to the church authorities the most treasured recovered artifact in the history of free Poland since 1990,” Minister Sikorski said.

The cathedral was mostly rebuilt by 1951 with the final tower restoration being completed in 1991, so the canvas can now return to its home of four centuries.

11 thoughts on “Cranach Madonna stolen by priest returned to Poland”