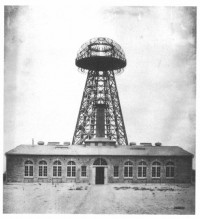 Nikola Tesla’s laboratory in Shoreham, New York is for sale. Known as Wardenclyffe or Wardenclyffe Tower, it is the last workshop standing to have been used by the electrical engineer, inventor, all-around genius and visionary for research. Unless the non-profit Tesla Science Center can raise at least $850,000 within the next 40 days, the property will be bought by real estate developers who will make condos and a shopping center out of it. The price of the land and the structures on it is $1.6 million. The State of New York has offered matching funds if the Tesla Science Center can raise the $850,000, so if they reach that fundraising goal, the Center will have $1.7 million to keep the property out of developer hands.

Creator of The Oatmeal and huge Tesla fan Matthew Inman has rallied his massive readership to see justice done. Last week he started a Let’s Build a Goddamn Tesla Museum fundraising campaign on Indiegogo which in five days has raised a dizzying $771,642. All the money donated will go directly into the bank account of the Tesla Science Center at Wardenclyffe.

Any moneys raised beyond the $850,000 mark are still very much needed. Buying the property is just the first step. The structures and grounds have seen a lot of hard living over the past century. They need a great deal of restoration and repair. After that, there’s the not inconsiderable matter of actually building a museum. As expensive and daunting a task as it may be, it’s so worthwhile. It’s a damn crime that there isn’t a single Tesla museum in this country. There’s an awesome one in Belgrade and he never even lived there.

Tesla began building Wardenclyffe in 1900 with $150,000 invested by J.P. Morgan. The laboratory building was designed by Gilded Age architect to the rich-and-famous Stanford White, which in and of itself is more than sufficient grounds for historic landmark status. He also built a 187-foot power tower, but it was never fully realized and in 1917 was dynamited by the government, afraid it was being used by German spies. Still, the foundation and labyrinth of tunnels underneath the tower are still there and that’s almost as cool. Even cooler, according to the March 27, 1904 issue of the New York Times:

While the tower itself is very stagy and picturesque, it is the wonders that are supposed to be hidden in the earth underneath it that excite the curiosity of the population in the little settlement. In the centre of the wide concrete platform, which serves as a base for the structure there is a wooden affair very much like the companionway on an ocean steamer. […]

Mr. Scherff, the private secretary of the inventor, told an inquirer that the companionway led to a small drainage passage built for the purpose of keeping the ground about the tower dry. But such of the villagers as saw the tower constructed, tell a different story. They declare that it leads to a well-like excavation as deep as the tower is high with walls of mason work and a circular stairway leading to the bottom. From there, they say, tunnels have been built in all directions, until the entire ground below the little plain on which the tower is raised has been honeycombed with subterranean passages. They tell with awe how Mr. Tesla, on his weekly visits to Wardenclyffe, spends as much time in the underground passages as he does on the tower or in the handsome laboratory and workshop erected beside it, and where the power plant for the world telegraph has been installed.

Tesla’s ultimate plan was for the tower to wirelessly transmit telegraphy, telephony and electrical power all over the world. The tower would harness the electrical energy of the ionosphere and then relay power to other strategically located towers, thereby electrifying even the remotest areas of the globe for free. This article in the New York Daily Tribune of August 7, 1901 (pdf) describes the initial stages of the project. Tesla talks about the tower solely as a communication device. Once the tower was built, Tesla’s far more ambitious plans for it came to the forefront. In this article in Electrical World and Engineer from March 5, 1904, Tesla describes them thus:

When the great truth accidentally revealed and experimentally confirmed is fully recognized, that this planet, with all its appalling immensity, is to electric currents virtually no more than a small metal ball and that by this fact many possibilities, each baffling imagination and of incalculable consequence, are rendered absolutely sure of accomplishment; when the first plant is inaugurated and it is shown that a telegraphic message, almost as secret and non-interferable as a thought, can be transmitted to any terrestrial distance, the sound of the human voice, with all its intonations and inflections, faithfully and instantly reproduced at any other point of the globe, the energy of a waterfall made available for supplying light, heat or motive power, anywhere-on sea, or land, or high in the air-humanity will be like an ant heap stirred up with a stick: See the excitement coming!

A smartphone in every pot.

Morgan only knew about the wireless communications plan when he financed the project. Insulted by Tesla’s less than tactful approach almost from the beginning and having lost interest in the communications aspect once Marconi transmitted the first radio signal on December 12, 1901, Morgan refused to give him any additional funding. Two years later, Tesla, hoping to pry more money out of the financier to complete the project, told Morgan about his global wireless power station idea. Morgan, not pleased at the prospect of a limitless supply of free electricity killing his ability to profit from industrial power, had his secretary write him a Dear John letter and that was the end of that.

Unable to keep the facility going or find new backers, Tesla was forced to abandon Wardenclyffe permanently in 1911. In 1915 he transferred ownership of the property to George C. Boldt, owner of the Waldorf-Astoria, to satisfy his $20,000 hotel bill (judicious money management was not Tesla’s strong suit, obviously). Boldt sold the property in 1925. In 1939 it was purchased by Peerless Photo Products who made a toxic dump of cadmium and silver out of it. AGFA bought it from them in 1969 and used the Stanford White building until 1992. In the 2000s New York State made AGFA clean up the toxic materials so as of 2009 it could be sold without all those bald children arousing suspicion.

Which brings us to today and the potential commercial buyers versus the potential for a kickass Tesla science museum. Click here to help make the dream a reality.