Lady Anne Clifford was born in 1590 to George Clifford, Baron de Clifford, and Lady Margaret Russell. Her brother Francis died when her mother was pregnant with her. He was just five years old. Her only other brother Robert died at six when she was just 14 months old. There were no other siblings; only Anne would survive to adulthood. After Robert’s death, Lady Margaret took her baby daughter and moved in with her sister, leaving her husband to his mistresses and war games.

George Clifford was a dashing figure, captain of the Bonadventure during the battle against the Spanish Armada, buccaneer, Governor of the East India Company and an accomplished jouster who served as Queen Elizabeth I’s champion in many a tilting tourney. You can tell from his jousting armor, now in the Metropolitan Museum of Art, how glamorous he was on the field, and how willing he was to spend his family fortune. He even had to sell some of his land to pay debt incurred gambling on jousts and horse racing.

George Clifford died in 1605. Upon his death, his daughter Anne assumed the title Baroness de Clifford which was hers by right because the barony had been created by Edward II under absolute cognatic primogeniture, meaning inheritance by descent through the first-born line male or female. That should have meant she got the estates and moneys that went with the title, but in a will signed just 11 days before his death, her father instead bequeathed his estates (and after her death, his wife’s estates too) to his brother Francis Clifford, Earl of Cumberland, and his male heirs.

Perhaps keenly aware that he was leaving behind an inheritance considerably more meager than he had found it, perhaps thinking that his wealthy adult brother was more capable of keeping it from degenerating any further than his 15-year-old daughter, perhaps manipulated by his brother on his deathbed, doubtless knowing that she would be married before too long, George Clifford left Anne only the sum of £15,000. Good money back then, to be sure, but nothing even remotely close to the value of the vast landed estates to which she was entitled.

He sorely misjudged both his wife and his daughter. Lady Margaret immediately filed suit to ensure Anne received her rightful inheritance. Francis wasn’t happy about it. When Margaret and Anne showed up at Skipton Castle, the Clifford family seat, in 1607, Francis refused to let them in. Undeterred, Margaret kept the lawsuit going, researching the Clifford estate in depth to present a mountain of evidence of her daughter’s claim in court.

In 1609, Lady Anne Clifford married Richard Sackville, 3rd Earl of Dorset. It was not a happy match. Much like her father, Dorset was a womanizer and a gambler and he had no interest in supporting Anne’s legal claim. He was enraged when she and her mother toured the Clifford lands in the north in 1614. He told her not to bother coming back home and threatened to take her baby daughter from her.

Lady Margaret died in 1616. Dorset, always in debt from his love of gambling and luxury he could not afford, wanted to get his hands on her property which George Clifford had willed to his brother along with his daughter’s inheritance. Richard was a favorite of King James I and was popular at court. He was able to pull strings and secure the lands held jointly by Margaret and George for him as his wife’s representative. He then persuaded Anne to sign a deed leaving him the land should she die without male heirs. She refused, however, to deed him the Clifford estates that were still in legal dispute. Dorset wasted no time and took Margaret’s lands for his purposes while Anne was still very much alive.

After Margaret’s funeral, a fight broke out between Anne and her cousin, Francis Clifford’s son Henry. The dispute threatened to get physical when Dorset brought his entourage up north. King James intervened to stop a duel between Henry and Dorset and tried to get Anne to compromise on her rights. Again she refused.

In March of 1617, the King devised a “settlement” which screwed Anne entirely but left Dorset with some cash to pay off his creditors. The deal was Lady Anne would sign away her claim to the estates and since his wife’s losses were also his, Dorset would be compensated £20,000. It seemed that after 12 years of battle, the patriarchy had beaten the Baroness.

Dorset died in 1624 leaving Anne a widow. She married again six years later to the Philip Herbert, Earl of Pembroke. This marriage was a dud too. They lived apart for most of it. Her uncle Francis died in 1641. In December of 1643 her cousin Henry died too. With Henry’s death, finally the Clifford estates returned to Anne. Unfortunately the First English Civil War had broken out in 1642. A staunch royalist, Anne remained in London for the duration of the war and was unable to claim her lands in person until the fighting ended in 1649.

In 1649, she headed back north to her hard-won estate. Her estranged husband was sick and died in January of 1650, leaving her a widow again. That was fine with her. She was 60 by then but vigorous and motivated to repair the damage done to the Clifford properties by the Civil War. Skipton Castle had been the only royalist stronghold in the north to put up an extensive fight. It was besieged by Parliamentary forces for three years. Cromwell, who had ordered the roofs removed after the castle’s surrender in 1645 and its near-demolition in 1648, objected to her restoration plan. Lady Anne went through with it anyway. Legend has it that Cromwell didn’t stop her because of he had much respect for her as the only woman who ever stood up to him. That seems unlikely to me. I imagine political considerations formed the larger part of his thinking.

The rebuild took her ten years, but in 1659 she planted a yew tree in the castle’s central courtyard to mark the end of the restoration and Skipton’s post-Civil War renaissance. She repaired other Clifford castles, churches and founded charitable institutions.

She also set about compiling a complete record of the Clifford family’s history, from the first baron in 1310 to her own four-decade struggle with the law and various titled bullies to claim her rightful inheritance. The records her mother had put together in the early days were included, as was other genealogical material, biographies of all Clifford lords and ladies, Anne’s diaries and day-to-day records of the operation of the estates. She had them bound into three 1,000-page, 600,000-word, three-volume Great Books of Record. Each set was kept in a different place so they could be referred to as needed.

Three hundred years later, all three sets found their way to the Cumbria Archive Service in 2004. Lady Anne’s Great Books of Record give us a unique window into the life of a 17th century English noblewoman, but the originals have only been available to scholars. In 2010, Renaissance scholar Dr. Jessica Malay was granted a Leverhulme Trust award of £158,000 (about $250,000) for a three-year project of transcribing the Great Books of Record for publication.

Malay’s research into the Great Books of Record, which contain material from the early 12th century to the early 18th century, reveals the importance of family alliances in forming influential political networks.

It shows that women were integral to the construction of these networks, both regionally and nationally.

Malay said: “The Great Books explain the legal avenues open to women. Married women could call on male friends to act on their behalf. As part of marriage settlements many women had trusts set up to allow them access to their own money which they could in turn use in a variety of business enterprises or to help develop a wide network of social contacts.

“Men would often rely on their wives to access wider familial networks, leading to wives gaining higher prestige in the family.”

Inspired by Malay’s research, the Abbot Hall Art Gallery in Kendal has put the Great Books on display for the first time in their long history.

Alongside them is another masterpiece from the unique vision of Lady Anne Clifford: The Great Picture, a triptych that depicts the three stages of Lady Anne’s struggle for her inheritance. The left panel is a portrait of Lady Anne when she was 15 and her father died, willing her birthright to her uncle. The middle panel, a piece so big Abbot Hall had to remove a window to get it into the gallery, depicts Lady Anne’s parents and her two brothers. Anne isn’t visible in the picture but she calculated the precise date of her conception and had the painter, probably Jan van Belcamp, paint her family with her as an unseen zygote. The right panel is Lady Anne at 53, the year her cousin died and she finally came into her inheritance. 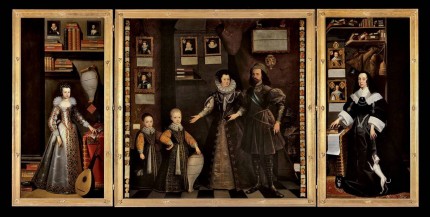 Lady Anne Clifford died in 1676. She was 86 years old. She left her estates to her daughter Margaret Sackville, Lady Thanet. Nobody contested it.

14 thoughts on “Lady Anne Clifford vs. the Patriarchy”