The archaeologists digging under the Leicester parking lot for the Greyfriars church where King Richard III was buried in 1485 started out with a long list of ifs and maybes. They weren’t sure they had the right location for the church which had been destroyed during Henry VIII’s dissolution of the monasteries in 1538 and built over for centuries. Even if their research on the location did turn out to be have been correct, there might be no remains left after the Tudor destruction and subsequent development. If there were physical remains of the abbey and church left to be found, they might not have found them in the two trenches they planned to dig. If they did find physical remains of the church, they might not have been sufficient to map an accurate ground plan and find the choir area where Richard was buried. If they did locate the choir area, there might be nothing there. If they did find human remains, they wouldn’t necessarily be significant since many people were buried in abbeys in churches. 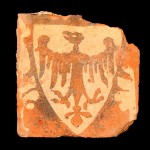 Knowing how the long the odds were of discovering anything pertinent at all, the University of Leicester’s excavation team was not so much cautiously optimistic as just plain cautious. They underscored that the archaeological search would nonetheless provide a fascinating window into the long-lost history of Leicester even when/if nothing Richard-specific was discovered. It was an exercise in managing expectations, as they say in the corporate world, not just the public’s but their own.

Then something completely unexpected happened: everything went right. The two trenches immediately revealed the remains of tiled walkways which proved to be the eastern cloister walk of the friary. They found part of the wall of the chapter house abutting it. Spurred by these promising discoveries, the archaeological team dug a third unplanned trench into a neighboring parking lot and found the walls of the church within the friary.

The next discovery was more than anyone had dared hope, or at least voice. Outside of the church perimeter to the south, the team unearthed a stretch of paving made of recycled medieval tiles of different sizes and wears laid in a random pattern. They believe these are the remains of the garden of Sir Robert Herrick, mayor of Leicester. Herrick bought the abbey land in the early 1600s and built a mansion and gardens on the site. Christopher Wren, future father of the famous architect, was tutor to Herrick’s nephew. He

recorded that there was a pillar on the grounds inscribed “Here lies the body of Richard III, some time King of England.”

Meanwhile, in the third trench inside the church area, archaeologists found large chunks of window tracery and a lead window H-section (part of the support for a stained glass window). There was a large window behind the high altar in the east of the church. The choir where Richard III was buried was in the east side of the church. They also found a medieval silver penny, a stone frieze they think was part of the choir stalls and copper alloy letters that might have come from tomb inscriptions.

Given these giant glaring exes marking the spot, and the huge turnout of 1,500 people who lined up to see the dig during the three hours it was open this past Saturday, the Leicester City Council agreed to extend the dig for at least one more week. It was supposed to have stopped Monday, but they couldn’t quit when they were so close, and the dig has been a huge boon for Leicester making the press all over the world.

Then, early this morning, the University of Leicester announced that human remains have been found. That’s all they said. No further details until the press conference today at 11:00 AM BST which is being tweeted live on @uniofleicester. If you don’t want to follow on Twitter, the UoL website will be posting live updates on this page. The press conference will be carried on BBC and Sky television and will be streamed live on the BBC website. I’ve tweeted Leicester to ask for a link to the live stream because I can’t find it.

Wake up, everyone! This is too exciting to sleep through. :boogie:

Okay I’m doing my own version of live updates just because I’m nerding out like a crazy person. UL is tweeting that they’ll be referring to people at the press conference using their initials so they just posted a bunch of names with their initials. One of the people listed is Dr. Turi King (TK), from UL’s Department of Genetics. Does that mean they’ve got something to DNA test?

BBC News live stream here! And it works in the US too! Head asploding!

* Richard Taylor: the search has resembled something out of a Dan Brown novel in terms of the twists and turns it has taken.

* Peter Soulsby, Mayor of Leicester went over a couple of historical highlights of the city. Thanks the public employees for giving up their parking and says given today’s announcement, they are going to have to go without their parking lot a little longer.

* Richard Buckley, co director of University of Leicester Archaeological Services, is describing the site, the layout of the trenches and what was found where.

* THE MALE SKELETON HAS UPON ON INITIAL EXAMINATION SUFFERED PERIMORTEM TRAUMA. BACK OF THE SKULL CLEAVED. ARROWHEAD FOUND IN THE BACK. SKELETON IN THE CHOIR HAS SPINAL ABNORMALITIES, PROBABLY FROM SCOLIOSIS, WHICH WOULD HAVE MADE HIS RIGHT SHOULDER APPEAR CONSIDERABLY HIGHER THAN HIS LEFT SHOULDER.

* Now Richard is telling me to calm the hell down because this isn’t any kind of sure thing, but it is exciting circumstantial evidence. Next up extensive testing and analysis.

* The location and modesty of the burial is in keeping with the historical sources, but the skeleton was not hunchbacked as Richard was described by Shakespeare and other sources. He was strong and appears to have died in battle. Historical sources invested physical deformity with spiritual deformity and could well have exaggerated Richard’s disability.

* Philippa Langley, lead for the Richard III society, had a dream, y’all. She says we should strive to make our dreams come true. She’s very composed, but I think she’s losing it on the inside.

* The archaeological site is not really display quality, so it sounds like the parking lot is going right back on top when they’re through.

* Next up is laboratory analysis at the University of Leicester. They’re hoping to recover mitochondrial DNA that can be compared to the DNA of Michael Ibsen, 17th generation nephew of Richard III. DNA analysis will take up to 12 weeks.

* The arrowhead found in the skeleton’s spine was barbed. They can’t say anything more than that right now since the find is so new. The barbed arrowhead was found between two vertebrae, not embedded in the bone.

* They haven’t cleaned the skull yet, but there are a couple of injuries to it visible. They don’t know if the head injuries or the arrow were the fatal blow. The only historical source to give details on how he died was the Ballad of Bosworth Field, widely considered unreliable. In the Ballad, Richard died of a poleaxe to the head.

* Philippa Langley thinks the Tudors constructed a mythological Richard, that to get closer to the truth of what kind of person he was, see the pre-Tudor sources from before he became king.

* She hopes the archaeology of Greyfriars will bring Richard’s story to an accurate and truthful conclusion.

And that’s all folks. Amazing. A. May. Zing.