A hundred million years ago, back in the Early Cretaceous when dinosaurs still roamed the earth, a tiny male parasitic wasp was going about his business when he flew into the web of an orb spider. Stuck in the silken strands of death, the wasp could only stare at his impending doom as the juvenile arachnid descended upon him to sup heartily on his mortal shell. He felt the hairy touch of the spider’s legs, one, then two, then three, and knew the fatal assault was finally upon him.

A tree, witness to this most primal of scenes, saw again how death is but nourishment of life and wept a single resinous tear of joy or sorrow, we cannot know today which, at nature’s remorseless cycle. As the resin flowed from the tree’s ducts, its path intersected predator and prey. The former found his role suddenly reversed. Now he too was immovably stuck, entombed forever with the dinner he would never enjoy still in his grasp, an arthropod Tantalus. 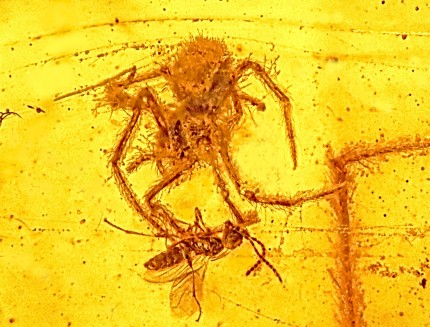 But he was not destined to spend eternity alone with the creature he had come so close to feasting upon. There was another witness to this small but great event, another orb spider sharing the web, an adult, an older brother to the youthful hunter in bond if not in genetics. It is a rare sight to behold, this social relationship between the mature and the callow, in the solitary world of the spider. Far more common would be the adult male spider making a meal of both the younger one and the hapless wasp. This scene frozen in time is the first instance of an arachnid social relationship and the first ancient spider attack on prey in his web ever found.

And thus the essential moment was captured, the predator and his prey, 15 unbroken silk strands of the one’s home and the other’s fatal trap, the father and son or big brother and little brother or just plain friends, locked together in a translucent golden coffin even while the world around it boiled and froze and tore itself apart, even while all others of their genera died away never to return. Ten million years passed ten times.

The resin and its occupants, now hardened and fossilized, were buried deep under the soil of the Hukawng Valley in Kachin state, the northernmost region of Burma. When the humans came, they would see those chunks of hardened resin as objects of great beauty, of mystical significance, of medical importance. For generations they would dig deep and shallow with wooden shovels and sharpened bamboo to mine the valley’s amber wealth. It became known as a source of prized amber from China’s Han Dynasty (206 B.C.–220 A.D.) onward and remained fabled for it even during and after World War II when production was stopped as the region was roiled by conflict.

The amber fields would lie fallow until Canadian mining company Leeward Capital Corp. trod the treacherous diplomatic and regulatory terrain to restart production in 2000. They planned to sell it for its gem value, but first they needed to know its age. Paleo-entomologist Dr. David Grimaldi of the American Museum of Natural History in New York examined the first batch. He found that Hukawng Valley amber, known as Burmite, dated to the Cretaceous and was thus some of oldest gem-quality amber in the world.

The prevalence of Baltic amber on the gem market saved these marvels for science. The value to researchers of such ancient amber rich with insect and plant inclusions exceeded its value to jewelers. When Dr. Grimaldi had purchased enough stock to keep him busy for years, Leeward struck up a resale arrangement with Kentucky collector Ron Buckley who had been locked in a fascinated embrace with amber since 1972.

Buckley photographed more than 3000 Burmite specimens as much as 100 times each. He selected 150 pieces of amber with particularly spectacular denizens and made them available to researchers. Dr. George Poinar from the Department of Zoology at Oregon State University in Corvallis is one of them. Together he and Ron have published multiple papers on the flora and fauna trapped in the amber of Hukawng Valley. The unprecedented significance of the orb spiders and the parasite wasp may make their most recent paper perhaps the greatest of them all.