No, this is not a “who’s buried in Grant’s tomb?” trick question. Sir James Tillie left such unusual instructions on the disposition of his mortal remains that after his death his servants were forced to improvise. No documentation of what they did has survived, so the location of Sir James’ body has been a mystery since the early 18th century. 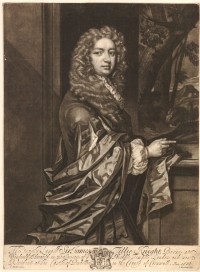 James Tillie was born on November 16th, 1645. His early years are also shrouded in mystery, both because there isn’t much to be found in the historical record and because what there is to be found relies heavily on his own claims, and he was a notorious liar. He came from humble circumstances, we know that much. According to this print he commissioned of himself the year he was knighted, he was born at Winfield, presumably a town in England, and educated at the Honourable Society of the Middle Temple in London, at that time a law school and still today one of the four professional associations that is entitled to make their members official barristers.

Who knows if he really attended the Middle Temple (probably not), but we do know that by the 1680s, he had managed to garner an excellent position as land agent to Sir John Coryton, a baronet and member of parliament who owned the large estate of Newton Ferrers in the Tamar Valley of Cornwall. He made a lucrative business of it by God knows what shady means, and in 1687 Tillie bought himself a knighthood from King James II. Apparently he misrepresented himself so massively that King James later launched an investigation into Tillie’s knighthood and coat of arms on suspicion that he had secured the “favour of knighthood” under false pretenses. Luckily for Sir James, King James’ days on the throne were numbered. He fled and was replaced by William of Orange and Mary Stuart (King James’ daughter) in the Glorious Revolution of 1688.

Two years later, someone else’s misfortune turned out to be another great stroke of luck for Sir James Tillie. His patron, Sir Coryton, died in 1690 at the early age of 42. His death was agonizing, sudden and highly suspicious. There were rumors that he had been poisoned, possibly by Sir James, possibly by Sir James and Sir John’s 37-year-old wife Elizabeth Chiverton, the wealthy daughter of a former Mayor of London. Even before Sir John’s death, the buzz in the valley was that Sir James and Elizabeth were altogether too chummy. Tillie married the widowed Elizabeth shortly thereafter, which didn’t exactly allay suspicions, especially since Sir John had died without a surviving male heir, leaving his estate to his wife.

Sir James was now considerably wealthier than he had been and with an estate courtesy of his wife that encompassed a good part of the Tamar Valley. Next on the arriviste checklist was building himself a stately home. He divided the Newton Ferrers estate and took a chunk of it for his new digs. Construction on Pentillie was completed in 1698. 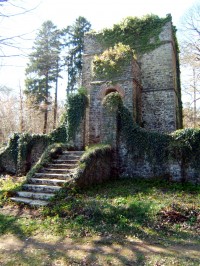 He had only 15 years to enjoy it. Sir James Tillie died childless but with a quiverfull of ego on November 17th, 1713. Convinced that this whole death thing wouldn’t last for him, he ordered that a three-story mausoleum be built on the highest hill of his estate, Mount Ararat. With beautiful views of his mansion and the bend in the River Tamar, his mausoleum was not to be his burial site, but rather a picturesque place for his body to wait for his resurrection. He expected this to happen within two years, so he instructed that his body be dressed in his finest silks and brocades, his head adorned with his zazziest peruke and finest hat, and that he be placed in a throne-like chair with his hands on his knees. He was to be secured to this chair with iron bands and the chair placed facing the window. Next to him would be an oak chest of his favorite books, port and pipe.

His servants fulfilled his wishes. Sir James sat clamped to his chair, rotting away, for the next two years. The mausoleum roof rotted with him. When the expected time of resurrection had come and gone, his staff finally decided that the decayed corpse of Sir James Tillie really should be buried instead of being left exposed to the elements. Where they buried him we don’t know. They could have buried him in the mausoleum itself, or in the cemetery of the parish church of St. Mellion where the Corytons were buried. There is no marker to be found nor surviving documentation. A limestone statue of Sir James Tillie sitting in his chair was erected in the same place where the original had sat.

Tillie left Pentillie to his nephew, James Woolley. Woolley, who changed his name to Tillie for the inheritance, left it to his son James who in turn left it to his daughter Mary Jemima Tillie who, in an appropriate historical twist, married Peter Coryton, heir to Newton Ferrers. They reunited the estate Sir James had divided after possibly killing a Coryton to get it, and thereafter Pentillie became the seat of the Coryton family.

The family did very well, increasing their holdings to more than 20,000 acres, and in 1809 decided it was time to make Pentillie a proper castle to reflect their prosperity. They hired landscape designer Humphry Repton, known as the intellectual heir to Capability Brown, to design a new look for the grounds and home. Architect William Wilkins, famed for his neo-classical Palladian style buildings at first and then for his neo-Gothic creations, implemented Repton’s plans in 1810, adding three wings to the house and transforming it into a full-on Gothic castle.

It seems that around this time they also altered the mausoleum, adding a plinth around the base of it and putting another story on top. That would explain why Sir James’ statue is now on the ground floor when early accounts described his body as sitting on the first floor.

In 1968, the mausoleum was listed as a Grade II* building, i.e., a particularly important building of more than special interest. Despite its importance and special interest, the mausoleum was not maintained well. It was already crumbling just a few years after it was built, and its decay was not halted by any of the alterations that may have been made in the 1810 expansion.

Pentillie itself, its Gothic additions demolished between 1966 and 1968 right before it too was listed and a new home built around the core, was in dire condition. Its reclusive owner from 1980 to 2007 shut herself in and went full Miss Havisham, only allowing a handful of servants access to the home or grounds. Neither the heirs, who lived on a nearby farm, nor construction workers were allowed to step foot on the property. It wasn’t until her death in September of 2007 that the current owners, Ted and Sarah Coryton, fell in love with the place and decided to open it up to events and B&B guests to fund the vast repairs it needed.

Last year, the Corytons, English Heritage, Natural England and local conservation officers came together to discuss repairs on the mausoleum. Overgrown with brambles and greenery, the structure was in imminent danger. They worked out a funding arrangement with Natural England and the Country Houses Foundation and a restoration team has now begun exploratory work. The first order of business: see if Sir James is in there somewhere.

To see if there’s a ground floor the plinth was built up around, the restoration team dug a hole in the internal floor of the mausoleum. Underneath they found a brick vaulted roof indicating there is a room under there. Is this where the staff put Sir James’ body to rest? Ted Coryton thinks so, and that his wife/possible poisoning accomplice Elizabeth could be under there too. Restoration is slated to begin in earnest this winter, so we should find out soon if the bones of Sir James Tillie were buried in what is now the mausoleum basement.

8 thoughts on “Is Sir James Tillie’s body buried in his mausoleum?”