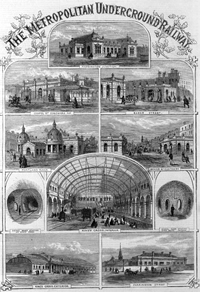 On Saturday, January 10th, 1863, London’s Metropolitan Railway line carried its first public passengers over six kilometers (3.7 miles) and from Paddington through five intermediate stations to Farringdon Street. It was the world’s first subway system and it was an immediate success, transporting 40,000 people that first day and 9.5 million the first year. These early subway cars weren’t like the ones we have today, but rather wooden carriages divided into compartments that were pulled by steam engines. They were literally underground trains.

Next month will be the 150th anniversary of the first passenger voyage of what would become known as the Tube and the London Transport Museum will be celebrating the event by running a series of restored trains along that first route from Paddington to Farringdon, now part of the Circle Line. The trains and cars used in 1863 have not survived, but other beauties from the steam era have. After extensive restoration funded by the museum, the Heritage Lottery Fund and private donations, Metropolitan Steam Locomotive No. 1, built in 1898 and Metropolitan Railway Jubilee Carriage Number 353, built in 1892, will return steam-powered mass transit to the London Underground.

Metropolitan Railway Jubilee Carriage Number 353 is the only survivor of 59 carriages that ran along the Circle Line in the last 15 years of underground steam rail. They were named Jubilee carriages because the model was first introduced in 1887 during Queen Victoria’s Golden Jubilee. Made out of teak wood with gas lighting and gold leaf accents, these were elegant first class carriages. Less than 20 years after the first carriages were produced, they were rendered obsolete when the Metropolitan Railway switched from steam to electric power in 1905. 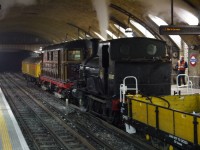 When the private Metropolitan Railway and Underground Electric Railways Company of London merged with city tram and bus services to become the London Passenger Transport Board in 1933, the Met Loco 1 steam engine was renumbered, repainted and used sporadically as part of London Transport’s above ground services. It was retired in 1963 after which it was purchased by the Quainton Railway Society (now the Buckinghamshire Railway Centre) and loaned to various museums and for special events over the years. In 2010, its boiler certificate expired which meant it could no longer run without a complete rehaul and re-certification. A complete restoration began in 2011 with the aim of returning Met Loco 1 to full steam running conditions in time for the 150th anniversary.

Jubilee Carriage Number 353 survived in a far more reduced circumstances. In 1940 it was purchased and moved to Knapps dairy farm in Shrivenham, Oxfordshire, where it was used as a garden shed. For 34 years it stayed on the farm, open to the elements. A toilet was attached to the end of it at some point. In 1974 the dairy farm was slated for redevelopment and the carriage was in danger of being destroyed. London Transport bought it for its historical value, adding it to its underground relics collection. It was in surprisingly good shape structurally, despite its hard scrabble post-war existence, and several ideas were considered about what to with it, including cutting out a section to put it on display. Thankfully Number 353 was kept whole and safe until 2011, when funds were raised to restore it too so it could be reenlisted into service 150 years after the first carriages ran underground.

After 15 months of painstaking work by Ffestiniog and Welsh Highland Railway, specialists in heritage railway carriage restorations, Metropolitan Railway Jubilee Carriage Number 353 is back to her former splendor. A team of masters and apprentices did the work, the apprentices a condition of the Heritage Lottery Fund grant to ensure that these skills are passed down to the next generation. Number 353 has been rail tested and runs like a charm. She is now officially the oldest operational subway carriage still known to survive.

Met Loco 1 and Carriage 353 will be recreating the first underground journey on Sunday, January 13th, 2013. For more pictures of the restoration of Number 353, see the museum’s Flickr set. There’s a smaller but still cool set documenting the overhaul of Met Loco 1 here. If you’d like some delicious and nutritious information along with those picture sets, the museum’s blog has a nice entry about the underground testing of the locomotive and lots of entries about the carriage as it was being restored.

Here’s video of the carriage during the 15 months of restoration: