On August 1st, 2012, the iconic Ritz Hotel in Paris’ Place Vendôme closed its doors for the first time since Swiss hotelier César Ritz and chef Auguste Escoffier opened them in 1898. They will remain closed for two years while the venerable establishment is renovated from stem to stern. The famously opulent contents were removed in September to be stored in a secret location.

While taking inventory of the Coco Chanel Suite, the designer’s home from 1934 until her death in 1971, the Ritz’s artistic advisor Joseph Friedman was struck by a large painting on the wall depicting the ritual slaying of Trojan princess Polyxena.

“When I saw this painting in the suite, I had to take a step back. It had a very powerful impact,” Friedman told AFP.
“The use of colour and the movement are remarkable. The influence of (Baroque master Nicolas) Poussin is obvious.” 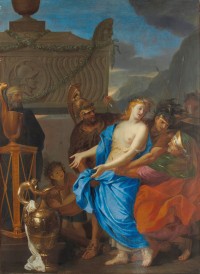 Friedman’s colleague Wanda Tymowsa identified the initials CLBF and the date 1647 in the corner of the canvas. The initials stand for Charles Le Brun Fecit (Charles Le Brun made it). Experts from Christie’s and leading French museums examined the painting and unanimously confirmed the attribution.

The 1647 painting, dubbed by Christie’s The Sacrifice of Polyxena, shows the youngest daughter of King Priam and Queen Hecuba with a dagger to her throat about to be sacrificed at the foot of Achilles’ tomb. In Euripides’ play Hecuba, the ghost of Achilles tells the Greeks that Polyxena must be sacrificed before the gods will send them the winds needed to carry them home and that Achilles’ son Neoptolemus is to do the deed. Polyxena goes willingly to her death over her mother’s despairing protestations.

Then seizing his golden sword by the hilt [Neoptolemus] drew it from its scabbard, signing the while to the picked young Argive warriors to hold the maid. But she, when she was ware thereof, uttered her voice and said: “O Argives, who have sacked my city! of my free will I die; let none lay hand on me; for bravely will I yield my neck. Leave me free, I do beseech; so slay me, that death may find me free; for to be called a slave amongst the dead fills my royal heart with shame.” Thereat the people shouted their applause, and king Agamemnon bade the young men loose the maid. So they set her free, as soon as they heard this last command from him whose might was over all. And she, hearing her captors’ words took her robe and tore it open from the shoulder to the waist, displaying a breast and bosom fair as a statue’s; then sinking on her knee, one word she spake more piteous than all the rest, “Young prince, if ’tis my breast thou’dst strike, lo! here it is, strike home! or if at my neck thy sword thou’lt aim, behold! that neck is bared.”

Le Brun made sure to capture the breast and bosom as fair as a statue’s, that’s for sure. Hecuba is on the bottom right, struggling to keep hold of her daughter while a Greek warrior (Odysseus?) pulls her away.

It’s an amazing find, a previously unknown early work by a painter who would become the predominant figure of French art of the 17th century. The Ritz archives have no information about the work, no record of purchase or installation. It could have been on the premises when César Ritz purchased the property, but the original 1705 building was extensively rebuilt during its conversion to the Ritz so that guests could have the latest and greatest amenities like electricity and en suite bathrooms in every room.

According to Christie’s Paris director of antique paintings Cécile Bernard, the painting with its elevated mythological subject is a “serious and academically perfect illustration of French classicism” and as such was probably commissioned rather than something Le Brun worked on privately. The discovery gives her hope that there may be other early works of Le Brun out there that we haven’t found yet.

In 1647, Le Brun was 28 years old already a successful artist. No less a figure than Cardinal Richelieu had commissioned several works from him when he was a teenager. Those paintings caught the eye of Nicolas Poussin, then Premier peintre du Roi (First painter to the King), who took the youth under his wing. When Poussin traveled to Rome in 1642, he took Le Brun with him. The young painter stayed in Rome studying the works of Raphael and antiquity with the master for three years, returning to Paris in 1646. He immediately began to receive commissions from courtiers and functionaries like finance minister Nicolas Fouquet and Richelieu’s successor as chief minister, Cardinal Jules Mazarin.

In those years after his return Poussin’s influence was still so strong in his work that people confused Le Brun’s paintings with Poussin’s. His time in Rome is reflected in the meticulous detail on the marble sarcophagus, vase, tripod and the incense casket the little boy is holding. The casket is derived from a drawing Le Brun made of ancient piece he saw in Rome, a drawing which has survived and was published in 2000.

In the 1660s, Le Brun would reach the pinnacle of success. King Louis XIV loved him and commissioned a series of paintings on epic mythological and battle themes. In 1664, Louis appointed him Poussin’s successor as First painter to the King, a post he held until his death in 1690. The Sun King dubbed him “the greatest French artist of all time.”

The Sacrifice of Polyxena is going on display at Christie’s New York from January 26th to 29th. On April 15th, the painting will be auctioned at Christie’s Paris’ Old Masters and 19th Century Paintings sale. The pre-sale estimate is €300,000 – 500,000 ($400,000 – 668,000). Mohamed Al Fayed, owner of the Ritz, is selling it “because he thinks its quality means it should be in a museum,” which is a bit of an eyeroller since odds are it’s going to be bought by someone with far deeper pockets than museums tend to have.