A 14th c. skeleton found buried under the floor of the chapel in Stirling Castle, Scotland, has yielded new clues to what a hard-scrabble existence being a knight errant really was. The skeleton was first uncovered in 1997 and radio-carbon dated to circa 1390 AD.

It wasn’t until until recent advances in laser scanning, though, that they found out how many hits the poor guy had to take during his young life.

He appears to have survived for some time with a large arrowhead lodged in his chest, while the re-growth of bone around a dent in the front of his skull indicates that he had also recovered from a severe blow from an axe.

He eventually died when he was struck by a sword that sliced through his nose and jaw. His reconstructed skull also indicates that he was lying on the ground when the fatal blow was delivered. […]

However, it was only recently re-examined following advances in laser scanning techniques that not only revealed the nature of the three wounds, but also showed that the knight had lost teeth, probably from another blow or from falling from his horse.

They think they know who he was: one Robert Morley, killed in tournament at Stirling Castle in 1388.

He had bone stress on his ankles from riding and muscle injuries from heavy lifting. His right arm was bigger than the other from all the swordplay. He was between 18 and 26 when he died.

I’m sure courtly love was on high his list of priorities, right after surviving axe blows to the skull. 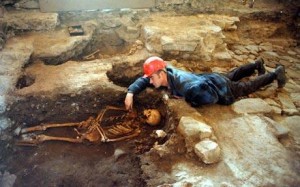 12 thoughts on “It’s hard out there for a knight”