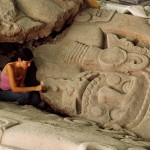 Archaeologists have been crossing their fingers ever since excavations at the Templo Mayor uncovered a monolith of an Aztec goddess in 2006.

Now they’re crossing all their toes too, because they’ve found a lavishly decorated canine skeleton guarding a sealed entrance.

The animal was found wearing wooden earflaps mounted with turquoise mosaic, a collar of greenstone beads, and golden bells around its four feet.

If it’s a dog, it suggests a tomb because in Aztec mythology the dog leads its master through the underworld. And if it’s a tomb and those seals are really still sealed, then this might be a major all-time find.

The existence of multiple seals suggests that the tomb, if it’s there, could be a collective crypt containing the king and his successors, López Luján said.

“Each time they buried a newly deceased [dignitary], they sealed the entrance with a plaster seal,” he speculated.

That the seals are unbroken suggests that the potential tomb has not been looted.

Droolworthy though the thought may be, they’re doing this in a painstaking way, so it’ll be a long time before we know either way.

2 thoughts on “The only tomb of an Aztec king?”