An intact cosmetics case was found in the tomb of a wealthy Etruscan woman.

Dating to the second half of the second century B.C., the intact tomb was found sealed by a large terracotta tile. The site featured a red-purple painted inscription with the name of the deceased: Thana Presnti Plecunia Umranalisa.

“From the formula of the name, we learn that Thana Plecunia was the daughter of a lady named Umranei, a member of one of the most important aristocratic families of Chiusi,” the researchers wrote.

The ashes of Thana rested in a small travertine urn, decorated with luxuriant foliate elements and the head of a female goddess, most likely the Etruscan Earth goddess Cel Ati.

The highly decorated cosmetics case was found nearby. Blocked from oxidation by a clay layer that had built up over time, the expensive imported Egyptian ointment survived intact, all the more remarkable when you consider that the unguentarium had no lid. The clay formed a seal with the alabaster vessel, keeping the air out.

Ancient cosmetics have been found before, but the elements had already gotten to them, which makes this find unique. It can be chemically analyzed in depth.

“The natural resins were the pine resin, exudated from Pinaceae, and the mastic resin, from Anacardiaceae trees. The lipid was a vegetable oil, most likely moringa oil, which was used by the Egyptians and Greeks to produce ointments and perfumes,” Ribechini said. 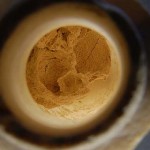 Also called myrobalan oil, moringa oil was mentioned by Roman scholar Pliny the Elder (23 A.D. – 79 A.D.) in his celebrated Natural History as one of the ingredients in the recipe of a “regal perfume” for the king of Parthes.

Since moringa trees were not found in Italy — they are native to Sudan and Egypt — and given the Egyptian origins of the alabaster unguentarium, the researchers concluded that the ointment was imported to Etruria.

Interesting note: she uses her mother’s family name. By the Roman naming convention — which is otherwise very similar — her first and last names would be feminized versions of her father’s name. Etruscan women were astonishingly emancipated, especially compared to the Greek and Roman societies that bracketed them.