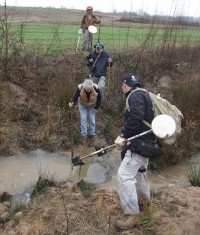 Archaeologists from the LAMAR Institute (the research organization that also played a pivotal role in the discovery of the Civil War prison Camp Lawton) have found the location of a small frontier fort which was the site of a significant Revolutionary War skirmish in Wilkes County, east central Georgia.

This was an incredible long shot. There are no contemporary maps pinpointing its location, only a few vague landmark descriptions in the primary sources. Researchers and surveyors identified about a dozen potential sites inside a search area of 2,700 wooded acres. With a limit budget funded by grants from the National Park Service American Battlefield Protection Program, Kettle Creek Battlefield Association, and the LAMAR Institute, a team of six people had one month to scour this vast area with metal detectors looking for remains of the fort and battlefield.

After a month of searching turned up more than a dozen 18th century settlements but no fort and no battlefield, they hit paydirt in the form of musket balls literally on the last hour of the last day of the project. With no money left in the budget to keep going, the team all volunteered to return for a few more days to find more evidence that they’d discovered Carr’s Fort. They unearthed a dozen fired musket balls, musket parts and hundreds of iron and brass artifacts from decorative scrollwork to horseshoes, buttons, door hinges and old frying pans.

This was not the engineered military fortification you think of when you think of forts. Robert Carr was a cattle farmer and captain in the Georgia Patriot militia. Part of his duties as a militia captain was to create a safe shelter for his men and their families should they find themselves under attack by Loyalists or hostile Native Americans. He built a stockade around his home and several outbuildings making a space the size of a tennis court where about 300 people could find some protection from enemy incursions. That’s Carr’s Fort.

There were more than 30 militia forts along the Wilkes County frontier during the Revolutionary War. This is the first one to have been found archaeologically. Modest though it may have been, this fort and the other frontier forts like it were strategic keys to holding Georgia.

Savannah had been captured by British troops under Lieutenant Colonel Archibald Campbell on December 29, 1778, an important victory for the British who were trying to reclaim the prodigal South in the wake of their failures in the North. In January, Campbell and his men were sent north to Augusta to recruit Loyalist militia. He met with limited success — many of the so-called Loyalists he signed never actually got around to forming militia companies — but Colonel John Boyd, who Campbell had sent on a recruiting mission to North and South Carolina, was able to recruit almost 800 Loyalists in his journey to and back from the Carolinas.

In response to the loss of Savannah, the Continental Army, chronically short of funds and manpower, had managed to scrounge up about 1,500 Patriot militiamen camped on both the Georgia and South Carolina banks of the Savannah River near Augusta. Under the command of Colonel Andrew Pickens, the militias went on the offensive, attacking Campbells’ camp just outside Augusta. They arrived to find it empty, however. The British were on an extended patrol. Pickens sent most of his men after them but directed a group of 250 men to Carr’s Fort just in case the Loyalists were planning on trying any funny business there. 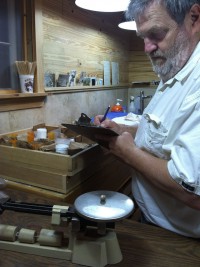 Pickens’ instincts (or intelligence) was spot-on. A troop of 80 Loyalists led by Campbell had occupied Carr’s Fort, but since the Georgia and South Carolina militia was hot on their heals, they had been forced to leave their horses and baggage train outside of the stockade walls. On February 10, 1779, the Patriot militia besieged the fort and a very short, very intense battle ensued. They exchanged fire for several hours leaving more than a dozen dead and wounded on each side.

It only ended because Pickens found out that Boyd’s 800 Loyalists were headed for Georgia from South Carolina, so he ordered the siege lifted and went to intercept Boyd. The Patriots took the Loyalist horses and baggage with them. Stranded without transportation or supplies, Campbell’s detachment left Carr’s Fort and marched back to Savannah to rejoin the main garrison. Pickens intercepted Boyd four days later on Valentine’s Day near Kettle Creek. The Patriots won. Boyd was mortally wounded and most of his troops were captured, wounded, killed or fled. About 250 of Boyd’s militia would eventually join up with Campbell’s forces.

Captain Carr, who may or may not have been present when the fort was besieged (the sources on the battle don’t mention him at all), was killed a few weeks later at his home by Loyalist Creek Indians who burned down the fort. His his wife and children were able to escape.

The artifacts recovered from the Carr’s Fort site are being cleaned. When that’s done, they will be given to University of Georgia. Daniel Elliott, President of the LAMAR Institute, says researchers are still looking for any remains of the stockade wall that may have survived the conflagration.