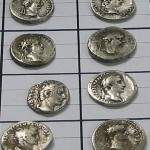 This time it’s a gigantic hoard of over 1000 Roman silver coins.

I think the date is initially misprinted in the article, though. It claims the coins date from between 206 BC and 195 BC, but that has to be AD. The head of Augustus is on many of the coins, and he wasn’t a twinkle in his great-great-grandmammy’s eye in 195 BC.

Mr Bennett, 42, who works at the central library in Leamington Spa, found the hoard in farmer Peter Turner’s field in Stratford-upon-Avon on July 13 last year.

Landowner Peter Turner, 74, said: ‘Keith had been metal detecting and suddenly stopped because he saw a large number of objects flash up on his screen.

‘After digging down around four feet he saw the top of a large pot had been smashed and hundreds of silver coins were inside.’

The quantity of coins is huge. Even back then it would have been worth five times a Roman soldier’s yearly salary. Most likely whoever owned the land buried the coins for safekeeping.

The British Museum is still appraising the hoard — it’s certainly worth tens of thousands of pounds — but it was officially declared a treasure today.