John Wilkins was a 17th c. inventor, academic, bishop, and Oliver Cromwell’s brother-in-law. In the 1640’s, he designed a space-going vessel that he thought would send a man to the Moon to establish trade agreements with the locals.

Not to crap on the most excellent Apollo rocket, but Wilkins had flair Werner von Braun could only dream of. His plans featured a wooden ‘chariot’ that would be propelled to the Moon by gunpowder, feather wings and springs. 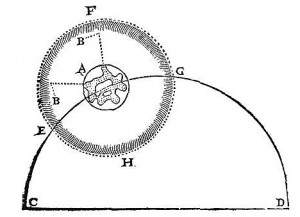 Suppose this earth were A, which was to move in the circle C, D. and let the bullet be supposed at B. within its proper verge; I say, whether this earth did stand stil or move swiftly towards D, yet the bullet would still keepe at the same distance by reason of that Magneticke vertue of the center (if I may so speake) whereby all things within its spheare are attracted with it. So that the violence to the bullet, being nothing else but that whereby ’tis removed from its center, therefore an equall violence can carry a body from its proper place, but at an equall distance whether or no the center stand still or move.

Yeah, I’m not sure I really get it either but apparently he was pwning Copernicus on the motion of the earth in this passage.

Sadly he doesn’t seem to have reached the prototype stage of the space chariot, although he was known to have built and tested a variety of flying machines when he was at Oxford, around 1654.

If you want to get a manageable and highly entertaining glimpse of Jacobean science, philosophy, theology, technology and how intertwined they all were, you could do far worse than to read The Discovery of a World in the Moone Or, A Discovrse Tending To Prove That ‘Tis Probable There May Be Another Habitable World In That Planet.

For something a tad closer to home, keep an eye on Space.com for the first new pictures of the Apollo Moon landing sites in decades. NASA’s Lunar Reconnaissance Orbiter will be looking out for our remains, including the American flag Armstrong planted that Aldrin saw blow down when the Eagle departed. 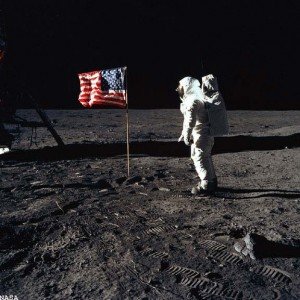 4 thoughts on “A Jacobean space program”