San Gennaro, the bishop of Naples who was martyred by Diocletian in 305 A.D. and is now the city’s most beloved patron saint, is richer than the Queen of England. People have been showering him with gifts since the 14th century, and thanks to the unstinting efforts of seven centuries of deeply devout custodians, his treasure remains intact despite Naples’ long, tortured history of foreign conquest and natural disasters. Now its 21,000 objects from gem-festooned necklaces to gold ostensories (containers that hold the consecrated Host) to silver and gold statues of exquisite artistry form a collection so valuable that it eclipses even the Crown Jewels of the United Kingdom.

It all started, as so many things do, with an eruption of Mount Vesuvius. It was 472 A.D. and the volcano that had destroyed Pompeii and Herculaneum 400 years earlier had Naples in its sights this time. Thousands of terrified Neapolitans sought shelter in the catacombs under the hill of Capodimonte. These catacombs had held the remains of Saint Agrippinus, sixth bishop of Naples and its first patron saint, since his death at the end of the 3rd or beginning of the 4th century and had become the locus of veneration for his cult. Some time between 413 and 431, Bishop John I moved the bodily remains of San Gennaro, aka Saint Januarius, into the Capodimonte catacombs, making it the center for the cult of that saint too. When Vesuvius struck in 472, the refugees huddled in the catacombs directed their desperate pleas for intercession to the more recently popular saint. The eruption stopped. From then on San Gennaro was the A#1 King of the Hill patron saint of Naples. (There are 52 in total, including good ol’ Agrippinus who is still on the books).

In the 9th century, Naples was besieged by Sico I, the Lombard ruler of the principality of Benevento. He failed to take the city, but he was able to make off with most of the relics of San Gennaro which he installed in the cathedral in the city of Benevento about 35 miles northeast of Naples. By the 11th century, the principality had been chipped away by Norman and northern Lombard invaders, ultimately leaving the city in the hands of the Papacy. With Benevento no longer safe, Norman King William I of Sicily had San Gennaro’s remains moved to the Abbey of Montevergine.

There they were pretty much forgotten. The Abbey was already well established as a pilgrimage site because it owned the relics of Saint William of Vercelli; San Gennaro couldn’t compete. He was still huge in Naples, though. His head and two ampoules of his blood had managed to stay in Naples when Sico took everything else, and it was those ampoules of blood that would launch the saint into the stratosphere. King Charles II of Anjou, son of the first Charles who conquered Naples in 1266 establishing a line of Angevin rulers that would last almost 200 years, commissioned three French goldsmiths to make a bust/reliquary of San Gennaro that would hold his head and blood. It was completed in 1305, and for the first time San Gennaro’s relics were put on display for public veneration. Charles’ son Robert the Wise had a silver container made specifically to hold the blood ampoules.

It was that blood that would come to define the saint’s cult. August 17th, 1389 is the first recorded instance of that desiccated 1,000-year-old blood miraculously liquefying when it was held aloft during a procession asking the saint to help end a famine that was devastating the city. The Miracle of San Gennaro, as the liquefaction became known, became a regular ritual. To this day, three times a year the archbishop of Naples celebrates a mass during which the ampoules are displayed with their dried, powdery contents and then displayed again once the contents have turned to liquid. Sometimes it takes a few minutes, sometimes hours, sometimes even days for the liquefaction to occur, but as far as I know, it has always happened, even, much to the city’s dismay, under the short-lived French Revolutionary republic of 1799, although that time the French commander had to threaten to kill the archbishop of Naples before the blood would turn.

Charles II of Anjou’s gift of a sumptuous reliquary for San Gennaro’s relics started the trend. Popes, emperors, kings, aristocrats and common people all gave votive offerings to the saint. Offerings from emperors and popes are rarely modest, and San Gennaro started collecting an extraordinary amount of wealth. When the rest of his remains were rediscovered in the Abbey of Montevergine in the 15th century, Cardinal Oliviero Carafa and his brother Alessandro, archbishop of Naples, scions of one of Naples’ most powerful and oldest noble families, secured them for the city. The disparate body parts of San Gennaro were reunited in Naples in 1497. Cardinal Carafa had a crypt, the Cappella del Succorpo, built under the major altar of the Duomo of Naples to house the relics.

Disaster struck again in 1526, this time in the form of plague. Again San Gennaro’s relics were held aloft in a procession to beseech his intercession. The Neopolitans vowed to build the saint a new chapel for his relics and burgeoning hoard in gratitude for his help. Gennaro indicated his approval by liquefying his blood. It would take more than a century for Naples to make good on its promise. Construction on the Chapel of the Royal Treasure of San Gennaro began in 1608 and ended in 1646. The finished chapel was dedicated to the saint with a Latin inscription that says it all about the city’s relationship with its patron: “Divo Ianuario e fame bello peste ac Vesaevi igne miri ope sanguinis erepta Neapolis civi patr. vindici” or “To Saint (it’s actually “god” but usage goes with a slightly less pagan translation) Gennaro, to the citizen savior of the country, Naples saved from hunger, war, plague and the fires of Vesuvius, by virtue of his miraculous blood, consecrated.”

In 1601, an organization was founded to conserve and protect the relics and treasure of San Gennaro. The Deputation of the Royal Chapel of the Treasure dedicated itself not just to maintaining the votive gifts received, but also to use the steady stream of donations to commission specific pieces in keeping with the religious significance of the collection. This is how the treasure developed into a collection to rival those of the crowned heads of Europe, because a select group of representatives from the five noble divisions and one commoner division of the city have been nurturing it non-stop for more than 400 years.

Unlike the Crown Jewels, however, San Gennaro’s hoard is barely known outside of Naples. It was kept in locked safes in the chapel (some pieces are now kept in bank vaults), and only rarely were individual objects taken out for ceremonial use. The only time the treasure budged was during World War II, when, after the Duomo was hit by Allied bombs in 1943, the precious artifacts were sent to the Vatican for safekeeping. In the chaotic post-war years, the streets weren’t safe and the police were too short on men to arrange for the safe return of San Gennaro’s treasure.

Enter a classic Neopolitan character: diver, hustler and self-styled “King of Poggioreale” (after the neighborhood he lived in) Giuseppe Navarra. In 1947 Navarra, who was the proud owner of the first license to carry firearms issued in Naples after the Liberation, volunteered to go to Rome and bring the treasure back. Accompanied only by Prince Stefano Colonna di Paliano, vice president of the Deputation, and holding a permission slip signed by Cardinal Alessio Ascalesi, archbishop of Naples, Navarra picked up the saint’s valuables, packed them in his car and drove down to Naples. As with any epic flight of treasure, the voyage did not go smoothly. They were blocked by a sudden flooding of the Garigliano river and two thieves stopped them at the city gates. Navarra and Prince Stefano somehow managed to get past the swollen river and the thieves, finally delivering the treasure to Cardinal Ascalesi on January 26th, 1947.

So the treasure of San Gennaro was safe at home, hidden away as usual, which is where it remained for 56 years. After much debate on whether the treasure should be kept in seclusion because of its devotional nature, in 2003 the Museum of the Treasure of San Gennaro opened adjacent to the Duomo. The saint’s jewels could now be seen by the public, as long as the public was in Naples.

Now for the first time a selection of the San Gennaro beauties has gone on display in Rome. The Mostra San Gennaro showcases two of the greatest begemmed pieces: the Necklace of San Gennaro, a necklace first created by Michele Dato in 1679 to adorn the bust of San Gennaro and added to over the years with donations of jewelry from the likes of Charles II of Bourbon, Maria Amalia of Saxony, Maria Carolina of Austria, Victor Emmanuel II and Queen Marie Josè; and the Mitre, made by Matteo Treglia in 1714 out of gilded silver and festooned with 3326 diamonds, 164 rubies, 198 emeralds and 2 garnets. Some of

those emeralds are Colombian, making San Gennaro’s mitre one of the greatest collections of ancient Latin American gemstones in the world.

Then there are the chalices, ostensories, crosses and silver and gold saints of jaw-dropping artistry. There’s a pyx made out of gold, red coral and malachite that was made in 1831, but the colors are so startlingly contemporary it could easily pass for a modern piece, or at least something from the Miami school of Art Deco.

The Treasure of San Gennaro will be on display at the Palazzo Sciarra in Rome until February 16th, 2014. 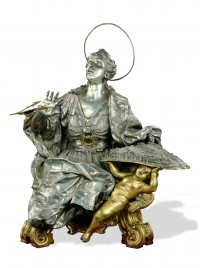 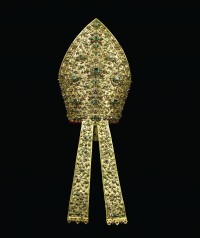