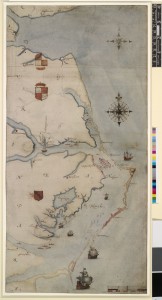 Last year, an intriguing new clue to the fate of the lost colony of Roanoke was found hidden under a patch on a 16th century map of Chesapeake Bay. The map in question was drawn by artist, cartographer and governor John White who founded the settlement on Roanoke Island that so famously disappeared when he was overseas attempting to secure supplies for them. It’s called La Virginea Pars (a partial map of the Virginia territory) and it is an impressively accurate survey of the east coast of North America from present-day Cape Henry, Virginia, to Cape Lookout, North Carolina. Originally made for Sir Walter Raleigh around 1585, the map has been owned by the British Museum since the mid-18th century.

There are two patches on the map, one at the southern end over the coast of what is today Pamlico Sound, the other on the northern part of the map where the Roanoke and the Chowan Rivers meet on Albemarle Sound. Adding paper patches to the maps to correct errors was common practice at the time so nobody thought much of it until last year when Dr. Brent Lane of the First Colony Foundation asked the museum to investigate them. He was researching the location of the Algonkian village of Secotan noted on White’s map and it occurred to him there might be some relevant information hidden under the patches.

Because the patches are original and were thoroughly glued in place by White, they cannot be removed without damaging the map. The British Museum therefore used a variety of imaging techniques including transmitted visible light (shine a light through the map in a light box), infrared and ultraviolet. They found that the southern patch was indeed covering an earlier, less accurate drawing of the coastline, as expected. The northern patch, on the other hand, was obscuring a large four-pointed star outlined in blue and filled in red. There was also a small red circle on the coast to the right of lozenge.

The First Colony Foundation historians believe the four-pointed star marked the location of a fort whose presence was a military secret, hence the cover-up in case the map fell into unfriendly hands. This is highly significant to the question of the Lost Colony because there are contemporary reports from the Jamestown colonists that the fleeing colonists were sighted in the Albemarle Sound area.

A quick recap of how the colony got lost: In 1587, Raleigh, holder of the Virginia land patent, assigned White the task of assembling settlers for a permanent colony in the Chesapeake Bay area. Unlike the previous expedition by Sir Ralph Lane in 1585, this colony was meant to be self-sustaining and thus included women and children. Among them was John White’s daughter Eleanor and her husband Ananias Dare. The new colony of 118 souls was established on Roanoke Island in late July 1587. They used the buildings left behind by the Lane expedition and built new ones. Just a couple of weeks later, on August 18th, 1587, Virgina Dare was born to Eleanor and Ananias. She was the first English child born in North America.

Her grandfather tried to make friends with the local Native Americans, but they weren’t having it. There was still tension leftover from their encounters with the Lane group and they were in no mood to sustain more hapless English who had arrived too late to plant any crops. Realizing they would have a hideous time of it once the ship supplies ran out, White left Roanoke in late August to return to England for fresh supplies. He arrived in November but was unable to turn right back around. Then there was the small matter of the Spanish Armada and subsequent brouhahas that made his return trip impossible for two more years.

When he finally landed on Roanoke in August of 1590, he found the island deserted. The colonists had built a fort and on an entrance post they left behind White’s only clue to where they might have gone: the word “CROATOAN.” This was the name of a friendly Indian tribe and the name of an island 50 miles south of Roanoke (today known as Hatteras Island) that they inhabited. John White searched for them for a short while, but weather prevented him from reaching Hatteras and when he started to run out of food and water, White was compelled to return to England. White never saw his daughter and granddaughter again. Nobody that we know of ever saw any of them again.

Later colonists, like those at Jamestown in 1607, looked for the Roanoke settlers. For centuries there have been rumors of east coast Indians with blue eyes and English-sounding words, but hard evidence of where they went has been nonexistent. They weren’t all slaughtered on the spot as the colony buildings appear to have been broken down in an orderly fashion. The likeliest scenario is that they broke up into small groups and sought shelter with local tribes none of which could have supported 119 people on their own.

The discovery that there may have been a fort on Albemarle Sound increases the possibility that the Roanoke colonists moved west inland rather than south to Croatoan Island. It was a much shorter and less treacherous trip and the location at the mouth of two well-trafficked rivers with establish trade routes to other Native American tribes, some of them friendly, would have given the displaced settlers a variety of options.

Archaeologists couldn’t just pack up their gear and start digging, though, because the spot marked by the X is privately owned. This year researchers got permission to scan the area using magnetometers and ground-penetrating radar.

“I don’t know if it’s one or a group [of structures],” he said, adding that they “could be joined or they could be close together.”

The mere presence of the buried structure indicates that there was a colonial presence in the area.

That’s not evidence of Roanoke colonists’ presence in the area, of course. The structure could be the remnants of the fort White documented or of something else entirely. We won’t know what it means until the landowners agree to allow digging and the funds are raised for an archaeological excavation.

3 thoughts on “New clues to fate of lost Roanoke colony?”