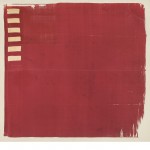 The 1775 Forster Flag, the oldest surviving American flag known, will be going under the hammer at New York City’s Doyle auction house on April 9th. It’s not the Star and Stripes we know as the American flag today, of course. It’s a red silk flag with 13 short white stripes in the canton (upper left quadrant of the hoist). What gives is the “oldest known American flag” title is that it’s the earliest surviving flag that was deliberately designed to represent the nascent United States with 13 white stripes, one for each of the 13 colonies. It’s also the only remaining Revolutionary War flag still in private hands. Since the remaining 29 Revolutionary War colors belong to museums or other institutions, it’s likely that this will be the last chance for one to come up for public sale. It’s not surprising, therefore, that the pre-sale estimate is $1,000,000 – $3,000,000.

The current owner is the Flag Heritage Foundation, a non-profit organization dedicated to the preservation and research of flags. They bought it in January of 1975 from Constance Knight Hodgdon, a descendant of the first owner, Samuel Forster of Manchester, Massachusetts. Forster was a successful merchant who was active in local politics and, as hostilities between the colonists and the British escalated leading to the expansion of the militia units, was elected Lieutenant of the Manchester Company, First Regiment of Militia, Essex County. That was in December of 1774.

On April 19th, 1775, the British Army marched towards Concord to confiscate a cache of weapons. Thanks to a very famous midnight ride by a certain Boston silversmith, the militia of Concord and Lexington had been alerted to the impending arrival of the regulars. The first shots of the American Revolution were fired at Lexington in the early morning. The British troops then advanced on Concord only to be repulsed by the Minutemen. By the time the Manchester Company reached Medford, 12 miles east of Concord, the British had already retreated. The company stayed in the area for five days just in case the redcoats returned.

According to Forster family lore, the red silk flag was captured from the British at the Battle of Lexington on April 19th. The cross of St. George was in the canton (the upper left quarter). That symbol of Britain was cut out and replaced with a square of red silk. Thirteen buff-colored bars representing the original colonies were then stitched onto the canton, six on one side and seven on the other.

Samuel Forster returned to Manchester where the company would remain, guarding the coastal towns from British naval attacks. The Forster Flag, now the company’s colors, benefited greatly from this assignment. Other regimental colors suffered from constant hoisting and lowering and battlefield damage. The few military colors that did survive, by long tradition were carefully preserved and handed down as precious mementos of regimental history.

The Forster Flag descended to Samuel Forster’s son, Israel (1779-1863), a prominent citizen of Manchester and a major in the War of 1812, whose stately home on the town’s main street, built in 1804, still stands today. A canton of white and blue stripes from a second flag found there is now in the collection of the Peabody-Essex Museum in Salem, Massachusetts. Early newspaper accounts report that the Forster Flag was on loan to the Massachusetts State House in Boston when Samuel’s brother, Israel, died in 1818, and that the younger Israel (Samuel’s son) had a difficult time retrieving it, since “state authorities … were for a time disposed to cling to it.” After this, the Flag descended through further generations of the Forster family, who held it for a total of two hundred years.

And they treated it right. The flag shows some wear along the hoist, but that’s just proof it was actually flown. It comes with a pair of tassels and a dress sash which may or may not be original but have certainly been with the flag for a very long time. Unlike the Star-Spangled Banner, the Forster Flag was saved from souvenir hunters subjecting it to death by a thousand cuts. Nobody recycled it for its lovely crimson silk. Nobody hung it outside in the weather or exposed it to the color-leaching rays of the sun. Nobody tried to restore it in some destructively ham-fisted fashion. The Forster-Knight family preserved it flawlessly for 200 years.

The Flag Heritage Foundation picked up where they left off, preserving it in ideal conditions for the next 39 years. It is the most valuable flag in their collection now and they’ve only decided to part with it to help endow the Whitney Smith Flag Research Center Collection at the University of Texas at Austin’s Dolph Briscoe Center for American History. It’s a noble cause.

This collection is a vast and unique library and archive documenting flags and their history. It includes the holdings of the Flag Research Center, created in 1962 by Dr. Whitney Smith, who is widely recognized as the foremost authority on the subject. The collection contains thousands of books, charts, pamphlets, serials, clippings and flags, as well as many associated objects. Including considerable research materials related to American history and Americana, with detailed information about the development of our national and state flags, as well as those of every foreign country, the collection is widely considered the greatest of its kind in the world.

The Forster Flag will be on display at Doyle New York (175 East 87th Street) this weekend and Monday. After that, it will be available for viewing by appointment only until the auction on Wednesday.