When it was minted in 1776, the Continental Currency coin didn’t have a denomination. There were silver, brass and pewter versions and numismatists still aren’t sure how they were used because there is no value notation on the coins themselves and no historical records authorizing the coins have survived. There are about 60 of these coins extant, most of them pewter. Only four of the silver Continental Currency coins are known and one of them has just sold at auction for $1,410,000. An impressive result for a coin whose original value is unknown.

On February 10th, 1776, the Continental Congress authorized the creation of the first national currency, paper notes in denominations from 1/6th of a dollar to 80 dollars. The name came from the Spanish dollars, whose reliable silver weight and purity had made them a global currency since they were first minted in 1497, used to back the notes. The design of the Continentals, as the notes became known, was the work of Benjamin Franklin, a long-time advocate for paper money who as early as 1736 had printed paper currency for New Jersey. The obverse of the Continental fractional dollars has the Latin “FUGIO” (I fly) written over a sundial and the charmingly Old Richard-esque legend “MIND YOUR BUSINESS” written underneath it. (It’s not really sure what he meant by that legend, but it probably wasn’t “mind your own business” in the way we think of it today. It’s more likely to have been a literal meaning of business as in see to your money-making. It could have been a rebus with the sundial and

FUGIO legend, meaning something like time flies so take care of your business.) The reverse has 13 linked rings, each labeled with the name of one of the colonies, surrounding a sun containing the legends “AMERICAN CONGRESS” and “WE ARE ONE.”

The borders and devices for the Continentals were the work of engraver and artist Elisha Gallaudet who had engraved New York State notes in 1771 and New York City notes, the first currency issued by an American city, in 1774. Elisha Gallaudet also engraved the dies of the Continental Currency coin that just sold. He left his mark — EG FECIT (EG made it) — on the silver coin making it one of very few coins from the colonial period to bear its maker’s signature. Experts believe that the Continental Congress intended the coins to replace the one dollar paper note.

The four resolutions from May 10, 1775 to May 9, 1776 provided for the issue of paper money in various denominations, including the one dollar bill. The six resolutions of July 22, 1776 through September 26, 1778 omitted the one dollar denomination. Thus, it is logical to conclude the pewter pieces were intended as a substitute for the paper dollars in those issues. The coins had minimal intrinsic value, and like the paper bills they replaced, were valued according to the public’s confidence in Congress, who guaranteed their value at one dollar each.

The mintage figures are unknown, but the pewter coins appear with enough frequency to suggest they were produced in substantial numbers. Many of the coins were undoubtedly melted during this period, because Benjamin Franklin observed that pewter was sorely needed for the canteens used by soldiers in the Continental Army. The most reasonable explanation for the brass examples is that they represent dies trials. The silver coins are of full weight and value, suggesting that a precious-metal coinage was contemplated, but the Continental Congress was chronically short of funds and had no reliable supply of silver, so this idea must have been abandoned quickly.

Instead they stuck with the paper notes which were cheap to produce but depreciated at an alarming rate. There were too many of them in circulation, and the British took advantage of their weakness to distribute huge amounts of counterfeit notes, devaluing them even further. Within three years of the first issue Continentals had dropped to 1/5th of their face value. A year later they had plummeted to 1/40th of their face value. A year after that they were no longer being used as currency at all. It wasn’t until the Constitution was 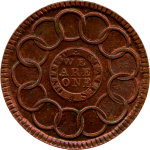 ratified that Continentals finally scraped up a little bit of worth: 1% of face value to be exchanged for treasury bonds.

Franklin’s fabulous design got another bite at the currency apple in 1787 when it graced the first official penny of the United States of America, today known as the Fugio Cent after the Latin “I fly” legend.