The first round of coins from the Saddle Ridge Hoard, the 1,427 gold coins discovered in Northern California in February of 2013 by a couple walking their dog, has gone up for sale and is being snapped up by collectors. Since sales began on Tuesday, more than half of the coins have sold.

The festivities began at 7:30 PM on Tuesday at the Old Mint in San Francisco, the very same building where many of the Saddle Ridge Hoard coins were first struck. Sixty of them were put on display, including the most important and valuable single coin in the collection: an 1866 $20 Double Eagle that is missing the motto “In God We Trust” on the back.

It’s an extremely rare piece, as Congress had passed a law in March of 1865 authorizing the placement of the motto on all gold coins that “shall admit the inscription thereon.” The San Francisco mint apparently lacked the proper equipment to include the motto at that time. That little oversight makes the coin valued at $1.2 million.

An hour after the exhibition, one coin went up for auction at the Old Mint: an 1874 $20 Double Eagle. It sold for $15,000, with all the proceeds going to restore the National Historic Landmark and converting it into the San Francisco Museum at the Mint. The buyer was Ray Lent with Placer Partners, which is heavily involved in the cause. The mint museum will be the first museum dedicated to the history of the city, believe it or not. You’d think a place like San Francisco would be lousy with them. Here’s a video of the culmination of the auction and an interview with Ray Lent explaining why they secured the coin for the museum. There are some great shots of the space and the exhibition.

With the non-profit part done, commerce began. Coin dealer Kagin’s Inc. put up hundreds of coins for sale Tuesday night. By midnight, 225 coins offered for sale on the website were bought for a total of $2.4 million. Even more coins were listed on Amazon Tuesday night. Within an hour, 346 of them had sold for more than $1 million. At this rate, the initial estimate of the hoard’s value at $10 million will be surpassed by at least a million. 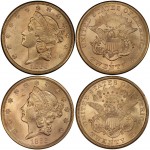 The 14 finest coins are being sold in a single lot along with the original can that was their home for near a century and a half. They’re available on Amazon for a cool $2,750,000 and yes, you can buy them with 1-Click. As of this writing, 572 coins from the hoard are for sale individually on Amazon, priced between $2,975 and $17,500. Kagin’s has 55 coins for sale on its website and numbers are diminishing rapidly.

It’s the condition of the coins and their Robert Louis Stevenson-like story that underpins their commercial success. The gold coins are nearly all in mint condition, with coins struck between 1847 and 1894 and barely circulated. They were buried in eight metal cans in the Gold Country of the Sierra Nevada mountain until their rediscovery by the property owners last year.

Eventually almost all of the coins will be sold. The owners, known only as John and Mary, will keep a few coins for sentimental reasons.