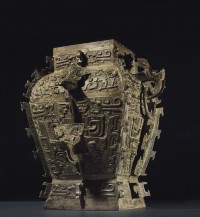 A large bronze ritual wine vessel from the Late Shang dynasty (12th/11th century B.C.) that is the greatest example of its kind has been donated to the Hunan Provincial Museum where it was reunited with its lid after almost 100 years of separation. It was slated to be the star lot at a Christie’s Asian art auction on March 20th, but a group of Chinese collectors came together to buy the artifact for the museum. The private sale went through on March 19th, one day before the auction. The sum paid is undisclosed, but the scuttlebutt is that it was around $30 million.

At more than two feet high, the Min Fanglei (Min is the name of its maker inscribed inside the vessel’s neck, fanglei is the word for “wine vessel”) is the largest archaic bronze of its kind, taller even without its lid than any other known example with lids.

The vessel’s massive size distinguishes this extraordinary work as one of the foremost examples of its kind. The surface is intricately cast with stylized animals and mysterious monster masks that provide a fascinating insight into early Chinese culture and beliefs. The crisp, precise casting of this complex design vividly illustrates why bronze vessels created during the Shang and Zhou dynasties rank among the finest examples of bronze casting the world has ever seen.

When it last passed through Christie’s hands in 2001, the vessel sold for $9,246,000, then a world auction record for any piece Asian art. It remains a record price for an archaic Chinese bronze sold at auction.

It was certain to blow right through that figure had it gone under the hammer in March. The Hunan Provincial Museum would have found it very expensive to go head-to-head against the deep-pocketed collectors that have driven prices for Asian art into the stratosphere over the past decade or so. It declared its intention to bid, but odds are slim it would have won. Wanting the masterpiece rejoined with its lid in the museum inspired Taiwan collector Robert Tsao to contact his fellow collectors abroad, in Taiwan and on the Chinese mainland and call for a united front: nobody bids to give the museum a chance to win. The private purchase ensured nobody else could kill the reunion plan.

The Min Fanglei was unearthed by peasants in Taoyuan County, Hunan province, in 1922. The son of the peasant brought the lid to his school in the hope that the schoolmaster could identify it. The schoolmaster immediately recognized what a treasure it was and bought the lid for 800 hundred silver dollars. Meanwhile, a businessman from Hubei province (Hunan’s neighbor to the north) got wind of the find and bought the body of the vessel for 400 silver dollars. That’s how the two parts got separated.

The lid was sold to a military officer who gave it to the Hunan government in 1952. In 1956 it became part of the permanent collection of the Hunan Provincial Museum. The body was sold to the city of Shanghai in 1924 and then purchased at auction by foreign collectors. While the lid stayed in China, the vessel traveled the world, jumping from collector to collector in the US, the UK, Japan and France. It was a French collector who bought it at the 2001 Christie’s auction. He died earlier this year, which is why the Min Fanglei was on the market again.

The Min Fanglei arrived in Changsha, Hunan’s capital on June 21st. On June 28th at a ceremony at the museum, officials placed the lid on the vessel for the first time in a century. It will go on permanent display at the Hunan Provincial Museum in 2015 when it reopens after a three-year renovation.