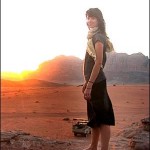 You know the miniature gemstone of Alexander the Great I blogged about last month?

Well, it turns out he was found by one Megan Webb, an undergraduate student from Annapolis, Maryland, who joined the University of Washington Field School’s program at Tel Dor to get some extra credits and learn about ancient ceramics over the summer.

Beginner’s luck doesn’t even begin to cover it. I mean, this is the only Alexander portrait carved on miniature gemstone that has ever been found in an official dig — there are only a dozen or so in the world, and the others were all looted so we have no idea where they came from — and the nice Art History/Ceramics major who joined on an Indiana Jones-inspired lark finds it?

I wonder if some of the professionals on the dig were secretly shaking their fists. Although her boss, Sarah Culpepper Stroup, certainly isn’t.

“She was so careful, so methodical in her work, that’s really how she found it,” Stroup said. “She’s fantastic.”

I’m glad to hear that, because if some slacker had stumbled on what is widely considered the find of the year on the Mediterranean, many heads would doubtless explode.

This is such a major find, not only for its beauty and quality, but also because it rewrites the history of the Macedonian conquest of the area.

Alexander the Great’s armies swept across the area – including Tel Dor – around 322 B.C., she said. But because the town walls are still intact, Stroup thinks there was no resistance there.

“You don’t wear a very expensive, beautiful ring with the figure of Alexander the Great if you’re resenting your Greek overlord,” she said.

“I think the story people have been telling has been a very dramatic story…. but as we’re seeing at Dor, that’s not how it happened. (Here) we see how cultures will adopt and adapt and transform another culture.”

We still don’t know for sure what stone it is, incidentally, but Stroup thinks it’s a carnelian. It would have been set in a ring originally (hence its itsy-bitsiness) and is about 2300 years old.

3 thoughts on “More on Alexander the Itsy Bitsy”