Almost a thousand graves have been excavated over the past nine years in the cemetery of Arhontiko, near the ancient city of Pella where Alexander the Great was born.

Now we can add more to the tally, as archaeologists have uncovered 50 new graves dating to the 6th c. BC.

Weapons, helmets, gold, pottery and figurines were buried in some of the graves, indicating high social status among the deceased.

Gold foil pieces decorated with animal figures ornamented the eyes, mouth and chest of the aristocrats. The animal designs were symbols of royal power.

Ten of the 24 tombs, dated to the Archaic Period (580-480 BC), are believed to have belonged to aristocrat warriors. Based on the findings, the specific tombs are positioned along two paths that crossed each other, confirming that the “best” spots in pre-Classical cemeteries were reserved for the tombs of the wealthy and members of the aristocrat class.

Moreover, the deceased were buried based on their social class while members of the same family were buried close to each, other forming clusters dating back to the second half of the 7th century BC (late Iron Age) and even down to the early Hellenistic era. 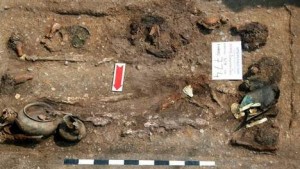 One thought on “50 new graves found near Pella”