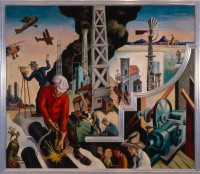 Before he become cover-of-Time-magazine famous as a muralist and leading light of the realist style inspired by local scenes known as Regionalism, Thomas Hart Benton’s first mural commission was a series of 10 murals for the boardroom of the New School for Social Research in New York City. Alvin Johnson, the school’s director and one of its co-founders, wanted its mission of unfettered inquiry and progressive thought to be reflected in the art and architecture as well. He commissioned Joseph Urban to design a new building in modernist International Style that stood out dramatically from the Greenwich Village town houses on West 12th Street. Benton collaborated with Urban to create murals that will flawlessly fit the walls of the third floor boardroom. 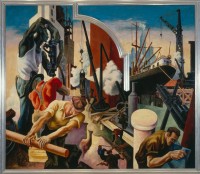 The new building opened on New Year’s Day 1931 with nine of the panels in place (Benton finished the tenth later) on the four walls of the 30-by-22-foot room. America Today depicts a wide view of American life in the 1920s: city and country, industry and farming, steel workers and bankers, coal miners and doctors, black and white, boxers and lovers, a hard day’s work and wild nights of dancing, north and south. Benton painted these murals, most of which are seven and a half feet high, referring to sketched studies he had made while traveling the country in the 1920s. Fun fact: his student Jackson Pollock posed for several of the figures. 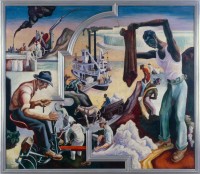 Benton received no fee for this immense work, just expenses, but he got a whole lot of artistic recognition. The critical success of the cycle led directly to commissions for eight other murals, including the Indiana Murals which cemented his mainstream fame and put money in his pocket. His dynamic, fluid, colorful style was a major influence for the WPA artists that soon followed.

The murals saw some hard treatment over the years, as students leaned their chairs against them, smoked like chimneys, exhaled moisture and transmitted bacteria. Thomas Hart Benton returned to restore his murals twice, once in 1956, once in 1968. He died in 1975 and seven years later, the school decided to sell the murals to fund its endowment. The plan was not happily received in New York City. If the panels were sold to a dealer or auction, they could be scattered to the four winds. Mayor Edward I. Koch even expressed dismay at the prospect of the mural cycle being split up and/or leaving the city. 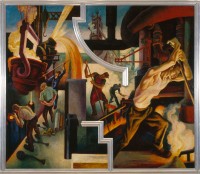 In May of 1982, the school sold the 10 murals to the Maurice Segoura Gallery. The gallery kept them for two years before selling them to the Equitable Life Assurance Society of the United States (aka AXA) for $3.1 million. AXA agreed to always display America Today to the public and proudly sported the murals in the lobby of its corporate headquarters on Seventh Avenue for years before the company and artwork moved to a new building at 1290 Avenue of the Americas. In February of 2012, a building renovation saw the murals moved into storage. 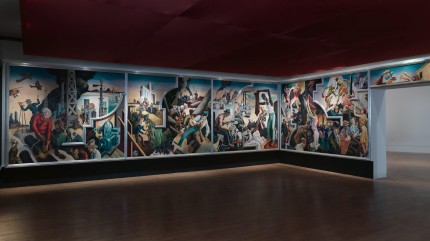 With no prospect of a proper display site coming up any time soon, AXA decided to donate the murals to the Metropolitan Museum of Art. The Met was more than happy to accept them. Before they could go on display, however, the museum had to create an appropriate space. As of September 30th, it has.

The keystone of the exhibition—the mural—will be installed in a reconstruction of the 30-by-22-foot boardroom as it existed at the New School in 1931, allowing viewers to experience the mural cycle as Benton conceived it. A highlight of this extraordinary opportunity to view the reconstructed mural in its nearly original setting is the incorporation of elements that were part of the architect Joseph Urban’s modernist aesthetic for the New School building, such as the black and red color scheme he used for the room. Among the mural’s most distinctive features are the aluminum-leaf wooden moldings, which not only frame the mural but also create inventive spatial breaks within each large panel. When the mural was installed at the New School, these moldings echoed the Art Deco details of Urban’s building design.

The exhibition also features Benton’s studies from this travels in the 20s and related works by other artists from the Met’s collection.