On Monday Greece’s Ministry of Culture announced the results of the first bone study on the skeletal remains found in the Kasta Tumulus in Amphipolis. Approximately 550 fragments of bone — some crushed, some whole and one skull missing the facial bones and teeth — were found in the tomb. Multidisciplinary teams from the Democritus University of Thrace and the
Aristotle University of Thessaloniki were able to sort 157 of the bone fragments into at least five individuals: a woman more than 60 years old, a man around 35 years old, a man around 45 years old, a neonate of unknown sex and fragments of cremated bones from a person of unknown age and sex. 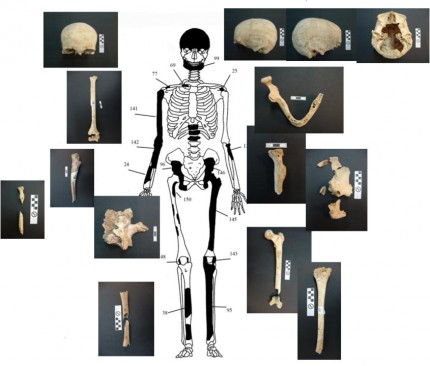 The woman has the most surviving bones which were found three feet above the floor of the limestone cyst grave. The one almost complete skull is hers and was instrumental, along with the pelvic bones and the long bone measurements, in determining her sex. She was about 157 cm (5’2″) tall and suffered from antemortem tooth loss, degenerative changes of the spine, osteoporosis and frontal hyperostosis. Those conditions led researchers to put her age at over 60 years. 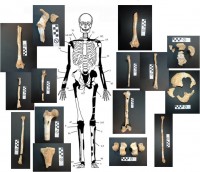 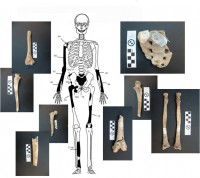 The younger of the men was about 168 cm (5’6″) tall and his bones bear clear unhealed cut marks that indicate he was violently assaulted with a sharp weapon in the left upper thoracic spine, on the nape of his neck and on both his sides. The older of the two was about 162 cm (5’4″) tall. He had fractured his right radius close to the wrist at some point, but it was fully healed before he died. Both men have degenerative osteoarthritis and spondylitis lesions in different areas. 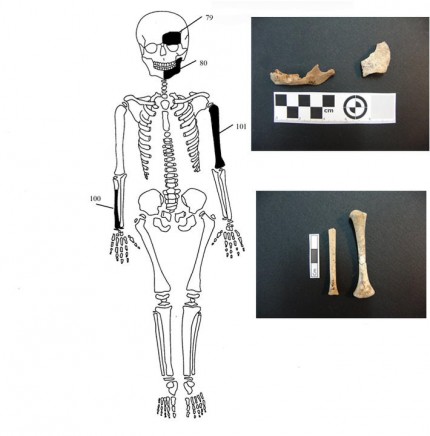 The infant was identified as a newborn by the length and width of the left humerus and mandible. The sex could not be determined because the morphological features that help identify sex are not developed in so young a baby. 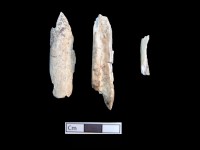 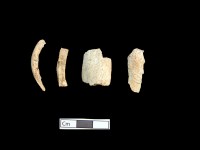 The fifth individual was identified from nine fragments of bones that bear the characteristic cracks, deformation and discoloration caused by complete cremations. Researchers believe these are the remains of an adult.

These are just the first round of results. Additional testing will include X-rays to find out more about the lesions and injuries to the bones, electron microscopy, paleogenetic analysis of any DNA recoverable, stable isotope analysis on the bones to identify the types of proteins in their diets, limited strontium analysis on bone samples (there were no teeth recovered except the root of an abscessed right mandibular second premolar, so the usual strontium testing on tooth enamel that can reveal where individuals lived as children is not possible) and Accelerator Mass Spectrometry (AMS) radiocarbon dating.

The hope is that researchers will be able to discover the diets, places of origin and, if DNA is cooperative, whether any of the people entombed were related to each other. It’s a long shot. The lack of teeth is a big minus for DNA extraction, and the neonate and cremated individual have such limited sample material that it’s unlikely they’ll produce testable DNA. The AMS radiocarbon dating will be done on the human remains but also on a number of animal bones, probably belonging to a horse, that were discovered in the tomb. If all goes well, the dates will illuminate the order of deposition in the tomb which can’t solely be determined by the excavation strata because the tomb was disturbed.

2 thoughts on “Remains of five people found in Amphipolis tomb”