From the dig that brought you the barrels full of 14th century human excreta in the city center of Odense, Denmark, the latest find is a small wooden stick inscribed with runes in the early 13th century. Excavations were already complete (the last day was August 29th, 2014) when archaeologists picked out three small pieces of wood while processing the large number of finds. The three fragments fit together to form a stick 8.5 centimeters (3.3 inches) long, 1.2 cm (.47 inches) wide and a few millimeters thick. Archaeologists saw there were lines on the front and back and recognized them as runes.

Lisbeth Imer, a rune expert from The National Museum of Denmark was called in to examine the stick. Preserved for 800 years in the anoxic, water-logged environment, the wood was soft with the texture of cold butter. After conservation — a long soak in water-soluble wax — the wood will firm up, but it might also obscure key details of the runes making them harder to interpret accurately. Imer therefore had to work with the soft piece as it was. There’s also a divot missing in the middle and at some point in its long life the stick was gouged by a root growing against the back.

She was nonetheless able to extract key words. The runes are in Latin (the runic alphabet can be used to write in any language, just like the alphabet I’m using right now). There’s the word salu, which can mean “good health” and the back is inscribed t = umi or t = ume famulum suum which together can be read as “Tomme his servant,” Tomme being the stick’s owner and the “his” referring to God. It seems, therefore, that this rune stick was an amulet meant to keep its bearer healthy. A broken hole at one end suggests it may have been worn on a string.

It’s the first runic inscription on a wooden stick found in Denmark in 50 years, but we know these sorts of objects were widespread in medieval Scandinavia despite their relatively poor survival rate because a stash of 670 rune sticks were discovered during excavations at the Bryggen commercial buildings in Bergen, Norway, after a 1955 fire. This rune stick was also found in a commercial milieu. It was unearthed in a layer containing the remains of trade stalls from the 1200s when the area is known to have had a fish market before it was moved just north to a site still known today as Fisketorvet or Fish Square.

The rune stick was displayed to the public on April 25th at Møntergården, Odense’s cultural history museum, as part of Research Day, but it won’t be exhibited again until conservation is completed.

Now I know what you’re thinking. Runes shmunes. What about the poop?! I’m delighted to report there is an update on the barrels of 700-year-old poop excavated at I. Vilhelm Werners Square in 2013, and it may be the greatest update of all time.

First about the barrels themselves: dendrochronological analysis found that the trees used to make the barrels came from Kolobrzeg, Poland, and were felled from 1348 to 1352 and 1346 to 1358. They were used to transport salt from Poland to Denmark and once the contents were removed, the barrels were repurposed. The poop dates to the 1360s, so the turn-over was quite quick. The staves of used barrels loosen up leaving gaps between them, a bug if you’re trying to carry salt, but a feature if you’re using them as latrines. The loose staves allowed liquid to slowly seep out into the ground leaving the solid waste to compact in the barrel. Studies have shown that with proper seepage, a single barrel can remain usable for one person for 20 years.

The compacted poop was removed from the two barrels and is being kept in plastic bags in refrigerators at the Odense City Museums. Researchers take out a teaspoon at a time, run it through a sieve and look at the particulate matter under the microscope. Grains and seeds can be identified by their cellular structure to give us a comprehensive picture of people’s diets in medieval Odense. So far they have found the remains of a variety of lovely fruits — apples, figs, elderberries, raspberries, blackberries, wild strawberries — and mustard seed which would have been used as a flavoring spice. They also found miller’s bran and corn cockle seeds from a weed that grows alongside edible grains. The seeds are actually poisonous, but because they are difficult to separate from the grain during harvest and processing, a few seeds make their way up the food chain and down the poop chute. Corn cockles are most commonly found in rye fields, so it was likely rye bread or porridge.

Regarding the moss discovered in the barrels, moss has been found in medieval latrines in England as well. Several species of moss make excellent toilet paper, it seems, and sphagnum moss, aka peat moss, not only provides a comfy wipe, but it has additional hygienic properties as well. There are two kinds of cells in the leaves. The larger of the two can hold water much like a sponge, so it acts as a wet wipe, washing the business area instead of just drying it. In the Middle Ages it was also believed to have antiseptic properties. Interestingly, peat moss is a common additive to modern composting toilets because it encourages the absorption of liquid, encourages aerobic action and helps block odor.

Speaking of odor, Odense City Museums invited Kouki Fujioka from Tokyo’s Jikei University to take a whiff of their medieval poop. He is a scent expert, you see, and has developed a system to detect, isolate and categorize scents. He took odor samples from the barrel excrement and will measure the proportions of acids and alcohols in them which will indicate the level of spoilage. He will also work to replicate the various hearty aromas of 700-year-old human excrement which may sound less than enjoyable, but the museum is excited about the possibilities of recreating the smells of the past. Imagine a museum exhibition in Smell-O-Vision. What an intensely immersive connection to history.

Human excrement isn’t the only scatological gold unearthed at this site. Archaeologists also found a perfectly formed dog crap from the 12th century, a very rare survival, which they are analyzing for pollen and seeds to discover what dogs ate in medieval Denmark.

Oh and they found some gold gold too — a 14th century cross pendant and a delicate 13th century ring with a cabochon garnet — if you’re the kind of weirdo who’s into that sort of thing. 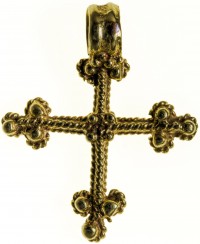 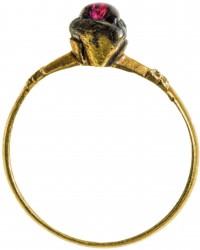