A dredging project in the port of Genoa has recovered a record haul of English cannons, other artillery and anchors dating from the 16th century through the 19th. The project has been ongoing since 2009 to make the port accessible to high tonnage commercial container and cruise ships. So far they’ve moved three and a half million cubic meters of port sludge which, after being sifted through for artifacts and unexploded ordnance from World War II (20 of them have been found and disarmed so far), is being used to expand the container dock of Calata Bettolo.

The artillery recovered includes five 17th century front-loading cast iron cannons almost three meters (10 feet) long each weighing around one ton. These are all of English manufacture. Earlier weapons found include two breechloading light cannons small enough to be fired by one person that are 1.5 meters (five feet) long and weigh a quintal (100 kilograms, or about 220 pounds). They are of unknown manufacture and date from the late 16th to the middle of 17th century. 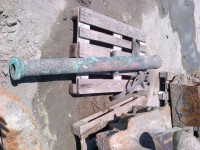 The rarest piece discovered is a bronze falconetto cannon. About two meters (6’6″) long and weighing two quintals, the small caliber cannon bears the mark of the Alberghetti family, a Venetian foundry active in the second half of the 16th century. The German Landsknecht mercenary troops famously used a falconetto in the Battle of Governolo on November 25, 1526, to take down Giovanni dalle Bande Nere, scion of the Medici family and leader of the papal troops. The falconetto shot hit his right leg leaving a wound so severe the surgeon had to amputate. The operation was too late and possibly too circumspect; a recent exhumation of his remains found that only his foot was amputated when witnesses like poet Pietro Aretino reported his wound was at

the knee. (Aretino wrote that the surgeon ordered 10 men to hold Giovanni down, but the warrior insisted not even 20 men could hold him down, so he just picked up the candle to illuminate his own surgery and told the doctor to get to it. The scene was too much for Aretino who fled the room to return only after it was all over. “I’m cured,” Giovanni told him.) Four days later, Giovanni dalle Bande Nere died from gangrene. The Landsknechts would take their falconetti and go on to sack Rome.

The anchor haul is impressive as well. Most of them are from the 19th century — a Rodger’s Small Palms anchor from 1832, several British Admiralty examples from the 1840s — but one is a British example from the 18th century and it’s massive. The anchor is five meters (16 feet) long and weighs four tons. It is the largest anchor and the only one of its kind ever recovered from Italian waters.

You can get a better look at how huge the anchor is in this Italian language video.

If you’re worrying about those cannons and anchors being left out in the sun, fear not. Artifacts retrieved after centuries in the ocean (eg, the Erebus‘ bell and the H. L. Hunley submarine) need to take very long baths to ensure their stability, and the artifacts are currently beginning their conservation with a leisurely desalinization treatment. Once they’ve been stabilized and cleaned of their copious incrustations, the cannons and anchors will go on display, likely at Genoa’s Galata Museo del Mare, the largest maritime museum in the Mediterranean, and at the Palace of St. George right across the street from the city’s Ancient Port.