Robert Hemming Poulsen lays fiber-optic cable for a living. For fun, he takes his metal detector with him on assignments and explores new places in his downtime. Last month Poulsen was installing a fiber-optic network on the Danish island of Omø when he struck up conversation with farmer Hans Peder Tofte. Tofte told him that as a boy he had found a silver ring on his property. Intrigued, Robert took his metal detector to the field and discovered several silver fragments and silver coins.

An experienced and responsible amateur, Poulsen stopped the search and alerted the Zealand Museum to his finds. With funding from the Danish Agency for Culture, the museum arranged for a more thorough exploration of the field. Last weekend museum experts joined Robert Poulsen and three of his experienced metal detecting friends to search the site. They discovered more than 550 silver fragments, silver coins, cuttings from silver coins and silver jewelry from the 10th century. This was an all-silver hoard.

All of the artifacts were unearthed in an area about 100 feet in diameter suggesting they were originally buried in a single hoard. The field has been ploughed for hundreds of years, however, so if there was a container, it has long since been destroyed and/or rotted away. The team dug beneath the ploughed soil just in case, but all they found was clean sand. There are no indications of an individual house or settlement in the area. It appears that the treasure was simply buried in a field. 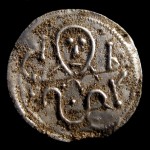 While most of the hoard is composed of fragments of hacksilver as small as .1 grams, including tiny cuttings of Arabic coins called dirham clips, it has a number of rare and important pieces. There are multiple coins from the reign of Harald Bluetooth. Minted between 975 and 980 A.D, the Harald Bluetooth cross-coins are considered the first Danish coins. They are so thin that the design on one side shows through on the other, and the silver content and weight are so low that metal detectors can’t detect them. Any find of Bluetooth coins, therefore, is always archaeologically significant.

Besides the Arabic and Danish coins, the hoard also contains silver coins from England, Germany, Poland and the Czech Republic. Some coins have yet to be identified. Three unidentified coins were found in an unusual configuration: one coin folded over the other two. Similar pieces have been found before in England, but they’re from later in the Middle

Ages and the they have one complete coin folded over a half coin thereby created a one-and-a-half denomination. All three of Omø coins in this configuration are complete.

The jewelry is all in pieces. Among the fragments of bracelets, rings and pendants are two objects of particular interest: a cross and pendant that are decorated in the same style as an important hoard of jewelry discovered on the German Baltic Sea island of Hiddensee in 1873. The Hiddensee treasure dates to the 10th century and is believed to have belonged to the family of Harald Bluetooth himself. The difference is the Hiddensee jewelry is all made of gold, while the pieces found on Omø are silver. That makes them unique. No other silver Hiddensee-type jewelry has been found before.

By Danish law, historical finds are treasure trove and property of the state. The Zealand Museum will thoroughly document and photograph every piece before sending them to the National Museum for valuation by experts. Finder Robert Poulsen will receive a reward based on the value of the hoard. The Zealand Museum hopes they will then get the hoard back for exhibition, but that depends on whether the National Museum deems its security measures sufficient to protect the find.