Dogs featured prominently in ancient Pompeii life before Vesuvius erupted in 79 A.D., and they still do, only now nobody owns them. Strays scrounge up a living amidst the “Cave Canem” (beware of the dog) mosaics and the plaster casts of their ancestors, trapped in their death agonies under 60 feet of ash and pumice.

Tourists with their fanny packs full of sammiches probably make for a fairly good feed, but even relatively well fed strays are unhealthy. Also, their constant foraging and excreting aren’t exactly good for the ruins, which have more than enough conservation problems to deal with on their own.

Today Pompeii’s emergency commissioner (Pompeii has been under an extended state of emergency a year and a half now) Marcello Fiori announced a new initiative to get all of Pompeii’s strays adopted. It’s a multistage process.

Volunteers from three of Italy’s leading animal charities, anti-vivisection league LAV, the National Animal Protection Authority and the National Dog Protection League, have been fitting the animals with microchips, collars and name tags.

In the next phase, the animals will be treated for any illnesses and then sterilized. Special animal welfare offices have already been set up around the ancient site, staffed by volunteers and providing food and warm shelter.

After that, the dogs will be put up for adoption on a dedicated website, www.canidipompei.com (”dogs of Pompeii”). The site doesn’t exist yet, sadly, but once it’s up you too can adopt yourself a warm, fluffy, adorable piece of history.

At least I assume so. The article says they’ll be seeking adoptive parents from all over the world, although I imagine there will be shipping issues. Probably non-residents will have to travel to Italy to pick up Fidus. I’m going to start saving up now. 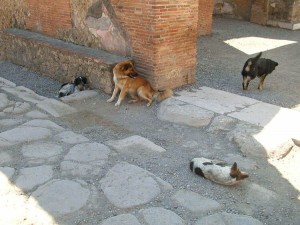 11 thoughts on “Adopt a Pompeiian dog”