It’s been 115 years since sponge divers off the coast of the Greek island of Antikythera recovered a bronze gear device that we now know as the first analog computer, and researchers are still working on solving the mysteries of the Antikythera Mechanism. The mechanism has been at the National Archaeological Museum of Athens since its discovery. For the first couple of years, nobody had any idea what a unique treasure it was. Museum staff focused on the more showy objects from the shipwreck — the divers had

raised 36 marble statues, many pieces of bronze statues, jewelry, glassware, lamps and amphorae from the site — and paid little attention to the corroded lump of bronze in storage. In 1902, an archaeologist noticed there was a gear in that lump, and there were words on that gear. The lump broke up as corrosion loosened its grip, eventually splitting up into 87 fragments.

how it worked, what it was used for, who made it and a panoply of other questions raised by the remains of the complex device. The first research published in the 1970s dated the mechanism to around 80 B.C., but the AMRP has confirmed a later date, between 150 and 100 B.C., based on the form of the lettering.

The first inscriptions read from the mechanism in 2,000 years were “Venus” and “sun ray.” Within months another 600 characters were deciphered and published. The advances slowed down after that, with 923 characters deciphered into the 1970s. Using 3D CT scanning, surface imaging and high resolution photography, the Antikythera Mechanism Research Project (AMRP) was able to more than double the number of characters deciphered on the device. Their first publication in 2006 brought the total up to 2,160. The most recent data, presented on Thursday, June 9th, at the Aikaterini Laskaridis Foundation,

brings that number up to 3,400 characters. There are 14,000 characters discovered this far on the device — even the smallest fragments have proved an important source of inscriptions — so there’s still plenty of deciphering left to do.

By examining the structure of the gears, the numbers of teeth, how they interact with each other, and the inscriptions, the AMRP confirmed

that the device was an incredibly detailed astronomical calendar that could predict eclipses, calculate the dates of the Olympics, the positions of the sun, moon and planets in the solar system and more. There is nothing else like it known from antiquity, and no other mechanical device would even come close to its complexity until the Middle Ages.

The latest research suggests that this mechanism wasn’t used by astronomers in their daily work, however.

“It was not a research tool, something that an astronomer would use to do computations, or even an astrologer to do prognostications, but something that you would use to teach about the cosmos and our place in the cosmos,” Jones said. “It’s like a textbook of astronomy as it was understood then, which connected the movements of the sky and the planets with the lives of the ancient Greeks and their environment.”

“I would see it as more something that might be a philosopher’s instructional device.”

The letters — some just 1.2 millimeters (1/20 of an inch) tall — were engraved on the inside covers and visible front and back sections of the mechanism, which originally had the rough dimensions of an office box-file, was encased in wood and operated with a hand-crank.

There is so much more to be learned about this precious device, and hopefully there will be new pieces of the puzzle discovered. The Return to Antikythera project, which in October of 2012 began exploring the shipwreck site for the first time since Jacques Cousteau’s two-day 1976 survey, proceeds apace. Artifacts like pottery, sculptures, a huge anchor and a bronze spear two meters long have been recovered from the shipwreck. Fingers crossed they’ll find more of the Antikythera Mechanism too. The newly deciphered texts have given researchers a much better idea of what parts are still missing, so marine archaeologists have a precise idea of what to look for now. The new diving season began in late May.

This video, produced four years ago for the Antikythera Shipwreck exhibition at the National Archaeological Museum of Athens, gives an overview of the wreck and its many inestimable treasures.

Also, I love this picture so much I had to feature it. It’s a marble statue of a wrestler that was half stuck in the sand and mud of the sea floor and half exposed to the water. One guess which side is which. 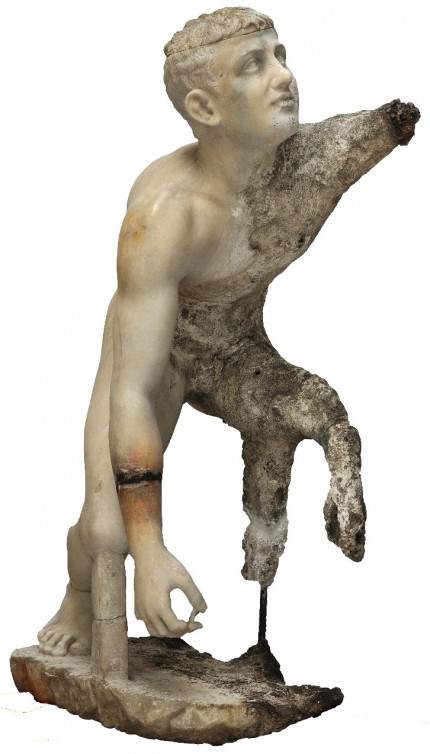 12 thoughts on “Antikythera Mechanism was an astronomy text”