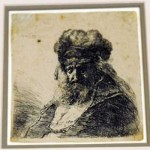 Then years ago or so ago, Monseigneur David M. O’Connell, president of the Catholic University of America in Washington, D.C., was looking for paper towels in the bathroom cabinet of his office when he found a strange bit of frame poking out under some junk. He pulled it out and found an etching that seemed familiar.

The name Rembrandt was on the back, but of course the Monseigneur had no way of knowing if it was genuine or a print or a copy.

In January of last year, Father O’Connell finally got around to asking the university’s records management archivist Leslie Knoblauch to have the etching appraised. While they were waiting to hear the results, CUA doctoral student Paul Wesley Bush translated the French inscription.

The etching measures 4.5 by 5 inches and has a paper backing that is crumbly and darkened with age. It bears a French inscription saying the picture is “the bust of an old man with a great beard seen about most of the face… His head a little perched gives him… the attitude of a man who sleeps,” according to [Paul Bush’s translation].

In February the appraiser confirmed that it was the real deal: a genuine etching by Rembrandt. How it ended up with the paper towels in the bathroom cabinet, nobody knows.

Rembrandt was famous during his lifetime for his etchings. He made them by drawing with a needle on a resin-coated copper plate. The plate is dipped in acid which etches the needle lines into the plate.

Bush suggested they make an exhibit around the marvelous find, and so they have. “Fine Lines: Discovering Rembrandt and Other Old Masters at Catholic University” will be at the May Gallery in the John K. Mullen of Denver Memorial Library through May 24. Admission is free.

The current exhibit also features two engravings of Abraham Lincoln photos taken by famed Civil War-era photographer Mathew Brady: one by Scottish artist and engraver Alexander Hay Ritchie and the other by American John Chester Buttre, whose work includes a steel-plate engraving of a full-length portrait of President James Buchanan.

Additional exhibit pieces now on display at the May Gallery include a watercolor copy of a print of Sir Thomas More by Hans Holbein; two black-and-white engravings by English artist William E.C. Morgan; and six woodcut prints by Julius John Lankes, an American artist whose works are included in the Metropolitan Museum of Art, the Library of Congress and the British Museum.

22 thoughts on “Rembrandt found in a bathroom cabinet”