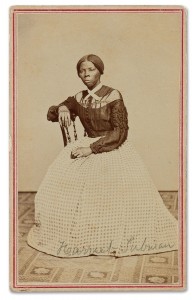 The previously unknown photograph of Harriet Tubman recently discovered in a carte-de-visite album compiled by Quaker abolitionist and educator Emily Howland has been acquired by the ideal owners: the Library of Congress and the Smithsonian Institution’s National Museum of African American History and Culture. The album was sold at a Swann Auction Galleries auction in New York City on March 30th for $130,000 plus a $32,500 auctioneer fee. The joint purchase allowed the institutions to be able to afford the exorbitant cost.

The collaboration ensures these pieces of American history will be accessible to the public in perpetuity.

“It is a distinct honor to have these photographs that tell an important part of America’s history,” said Lonnie Bunch, founding director of the National Museum of African American History and Culture. “We are pleased and humbled to work with the Library of Congress to ensure that this rare and significant collection will be preserved and made accessible to the American public.”

“To have a new glimpse of such key figures in American history is rare indeed,” said Librarian of Congress Carla Hayden. “Through this extraordinary collaboration, these images will be forever part of our shared heritage and will be a source of inspiration for many generations to come.”

The pre-sale estimate was $20,000 to $30,000, which was always modest given the great historical significance of the earliest known picture of Harriet Tubman. Add to that the 43 other rare photographs of prominent personages from the period in the album, including the only known photograph of John Willis Menard, the first African American man elected to (although never seated in) Congress, and there was little doubt the album would exceed the estimate. Well aware of this, the Library of Congress and Smithsonian pooled funds from existing donations to ensure they had the wherewithal to bid successfully against collectors with deep pockets.

The two institutions will be perfect partners in this endeavor. Both of them have unparalleled expertise in the conservation of historic documents and photographs and long-standing commitments to the digitization of their massive collections. In keeping with their dedication to making the historical patrimony in their care as widely accessible to the public as possible, the entire Howland carte-de-visite album will be digitized as soon as possible and high resolution photographs of each of the 44 pictures will be made available online for the free use of scholarly researchers and history nerds alike.