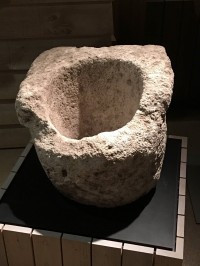 A stone toilet bowl from the 18th century that is believed to be the first flushing toilet in the Cape Fear region of North Carolina has finally been given the pride of place it deserves at the Brunswick Town/Fort Anderson Historic Site after years of sad neglect in archaeological storage.

The bowl was discovered by archaeologist Stanley South during his excavation of the remains of the Russellborough colonial mansion in 1966. Originally built by Captain John Russell in 1751, Russellborough would become the home of two colonial governors, Arthur Dobbs and his successor William Tryon. It was burned to the ground by the British in 1776 at the beginning of the Revolutionary War, but South’s excavation discovered notable remains, including a wine cellar that held at least 300 bottles when the house was burned, a brick well used to cool bottles (probably some of those 300 wines and liquors in the cellar), and one big stone toilet bowl.

Installed in the home in the 1760s, likely when Dobbs was governor, this is believed to be the first example of an indoor plumbing system in the lower Cape Fear area, although not in the state of North Carolina as a whole. It was discovered in what had once been a side porch of the home, which is a sensible location for a privy with its many noxious odors and miasmas. Next to it was a brick vaulted tunnel which likely served as a pipeline carrying both trash and sewage out of the house to the Cape Fear River or its adjacent swamps and rice fields.

No detailed archaeological reports were published from the original excavation 50 years ago, so a few old low resolution pictures, Stanley South’s field notes and a few articles he wrote over the years are all researchers have to go on when trying to determine what the toilet may have looked like and how the flushing system worked in the 18th century. This is all he had to say about the discovery in a 1967 article (pdf) published by The South Carolina Institute of Archaeology and Anthropology:

Immediately in front of the tunnel opening was a tabby object, twenty inches square at one end with a round, tapering hole throughout its 18 inch length. Just what this object was used for is unknown, though it might have been a liner for a water closet associated
with the tunnel and the porch.

Made out of coquina, a type of limestone composed of shells of various marine invertebrates that was extensively quarried in the Cape Fear region during the 18th century, the bowl has a hole at the bottom where the waste would be flushed into a pit, either through a lead pipe or a simple drain. The tunnel ran from the pit to the bluff, dumping the untreated sewage from there into the swamp or river. The top of the bowl is eroded now, but originally would have been square and a wooden seat or bench added on top to cover the gaping maw of the bowl creating a more human-sized hole and, most importantly, keeping the governor’s tender bits from grinding against ancient mineralized cockle shells.

The field notes describe what the archaeologists believed at the time to be an iron flush valve, but if it still exists, it has yet to be rediscovered. There are uncatalogued artifacts in the Raleigh storage facility; perhaps the valve is among them. Based on the design of other toilets from this period, researchers believe there was likely a tank installed above this one. No parts of it have survived, to our knowledge. It would have been filled manually, and when the rope was pulled, the valve would open, dumping water from the tank straight into the bowl. The force of the water pushed the waste down the drain into the pit.

The bowl was put in storage in Raleigh and that’s where it remained until Brunswick Town/Fort Anderson Historic Site director Jim McKee rescued it from oblivion and put it on display in the site’s museum on March 16th of this year.

The toilet excites McKee because it is so different from the dishes, pots, pans, bullets and smoke pipes on display.

“A toilet is universal,” he said. “Everyone has used one, and everyone can relate to it. Now visitors can see where they come from, how they were built, and how did we get to the throne we have today.”

McKee thought of all sorts of puns to name the display: Royal Flush, Royal duty or Royal throne.

Instead the placard is a bit more professional. It just reads, “Russellborough toilet.”