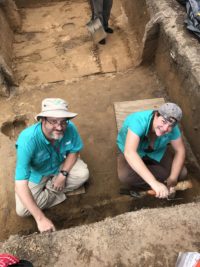 Archaeologists excavating the Santa Maria de Ochuse settlement in Pensacola, Florida, have discovered that it was the largest of Spain’s mid-16th century settlements in the southeast of what is now the United States. Founded by Don Tristán de Luna y Arellano in August of 1559, Santa Maria de Ochuse was the first European (albeit populated by a significant proportion of indigenous Mexicans and African slaves) multi-year settlement in the US. It lasted two years, a not inconsiderable feat considering their supply ships were destroyed by a hurricane a month after they set up stakes. Relief fleets resupplied them, but in 1561 the survivors abandoned the site and Spanish ships carried them back to Mexico. It took another four years before Spain tried again with the St. Augustine colony, founded in 1565 by Pedro Menéndez. That attempt had a far more successful outcome and St. Augustine is today the oldest continuously occupied European settlement in the continental US.

Located in downtown Pensacola within view of three wrecks of Luna’s ships just offshore in Pensacola Bay, the Luna settlement was first excavated in late 2015 by University of West Florida archaeologists. Since then, UWF Archaeology Institute teams have returned every summer to excavate the site. Finding evidence of its perimeter was one of their priorities, and with 900 shovels tests under their belt, this season they have accumulated enough information to get a real understanding of the dimensions of Santa Maria de Ochuse.

“We now know that the site really does have a definitive boundary and that encompasses an area of about 27 total acres minimum…and if we turn it into a grid, it’s about 31 acres,” said Dr. John Worth, the project’s principal investigator. “Either one of those numbers makes this the largest mid-16th Century Spanish residential settlement in the entire southeast.”

“That’s because Luna brought 1500 colonist, whereas St. Augustine and Santa Elena had something on the order of 300-600 settlers (at first),” said Worth in reference to the initial size of those colonies.

“So, we had the largest settlement at the time. Therefore, we have the largest archaeological site of the 16th Century Spanish Colonial era here, which really puts it on the map.” 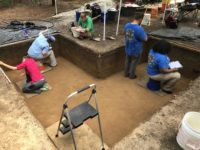 The excavations have also revealed some of the settlements lay-out. Luna’s colonists choice a bluff overlooking the bay as the main site. It was a level terrace, an advantageous location for construction and for defense. This season archaeologists hoped to discover more traces of a building they believe was the home of a high-status individual, likely the expedition’s treasurer, but did not find the posthole they were looking for. They’ll continue to search in future excavations, because postholes could give them a clearer picture of the precise location and orientation of the settlement’s buildings.

To follow the Luna Settlement Project excavation and read more about the history of the Luna expedition, read Dr. John Worth’s excellent blog. It’s not updated very often, but the posts are very content-rich with bibliographies that can lead you down many a rabbit hole. The project’s Facebook page is more frequently updated albeit in less depth.