A priceless collection of technical and engineering designs for the World War II Mosquito aircraft has been discovered hidden in a factory days before its demolition. An engineer found more than 20,000 drawings on microfilm cards in the building at Hawarden Airfield in Broughton, near Chester on the Welsh side of the border with England. This is the only complete archive of Mosquito technical drawings known in the world, all of which were top secret classified material during and after the war. It includes plans for experimental models that never made it to the prototype stage, including one that would carry torpedoes to attack German battleships, a previously unknown photo-reconnaissance plane, and a “Mosquito Mk I, Tropics” model that featured a compartment in the rear fuselage for storing desert equipment. It’s a great stroke of luck that they were discovered by an engineer who had the knowledge to recognize what a massive historical treasure he had stumbled upon and saved it before the bulldozers came in to raze the old factory and everything inside of it.

The factory did not actually make Mosquitos during World War II. It was operated by the Vickers Armstrong company at the time and manufactured Vickers Wellingtons and 235 Avro Lancasters. Only in 1948 did The de Havilland Aircraft Company take over the former Vickers factory and use it to produce Mosquitos and many other aircraft types. The Mosquito was a work of unique genius, designed by aviation pioneer Geoffrey de Havilland (first cousin of legendary actresses Olivia de Havilland and Joan Fontaine, daughters of his father’s youngest brother). The twin-engine two-seater aircraft was so versatile it was immensely effective in combat as, among other things, a tactical bomber, a day and night fighter, a U-boat striker and a pathfinder for bomber squadrons in large raids.

Its service in the RAF began in 1941 and its qualities were immediately apparent. For one thing, it was one of the fastest planes in the world. For another, it was made out of wood. Like Howard Hughes’ Spruce Goose, the Mosquito was constructed out of wood to preserve precious aluminum stores. Unlike the Spruce Goose, a giant lumbering folly that barely made it into flight a single time and that after the war, the Mosquito was manufactured quickly and efficiently by joiners and carpenters who transitioned seamlessly from civilian roles into aircraft production. Pieces of spruce, balsa and plywood were glued together and pressed into moulds, which allowed for fast production of a lightweight, nimble plane in factories that before the war had been manufacturing furniture, cabinets and pianos. This earned it the well-deserved moniker of “The Wooden Wonder.”

This 1944 newsreel shows how the Mosquito was made with bendy woods and glue like a theatrical prop, only deadly, fast and, you know, real.

Even the head of the Luftwaffe Field Marshall Herman Goering himself had to admit through gritted teeth that it was freaking awesome: “It makes me furious when I see the Mosquito. I turn green and yellow with envy. The British, who can afford aluminium better than we can, knock together a

beautiful wooden aircraft that every piano factory over there is building, and they give it a speed which they have now increased yet again. What do you make of that? There is nothing the British do not have. They have the geniuses, and we have the nincompoops.” His bitterness was informed by personal experience, as a Mosquito raid on a Berlin radio station where he had been scheduled to deliver a speech delayed him by more than an hour.

It was the remarkable wooden construction that shortened the aircraft’s lifespan so dreadfully. Plywood and balsa don’t last long, so while its metal contemporaries like the Spitfire survived for decades after the war, the Mosquitos degraded into nothingness. Production stopped in 1950 and any surviving stock was left to rot in storage. The last airworthy Mosquito in Britain crashed at an air show in 1996, killing both pilots. There are only three Mosquitos in the world today that can fly, one in Canada, the other two in the US.

The microfilm archive was donated to The People’s Mosquito, a charitable organization that seeks to rebuild a crashed Mosquito so that the aircraft that has been credibly described as “the plane that won the war” can fly again over England’s green and pleasant land. The technical drawings will allow them to reconstruct the plane to modern aviation safety standards while ensuring its historical accuracy.

The charity hopes to resurrect the remains of a Mosquito night fighter that crashed at RAF Coltishall, in February 1949, while serving with No 23 Sqn.

Ross Sharp, engineering director for the project, said: “As you can imagine, restoring an aircraft that is 70 years old presents several challenges, one of which is a lack of information on the building techniques, materials, fittings and specifications.”

“These plans enable us to glean a new level of understanding and connection with the brilliant designers who developed the world’s first, true, multi-role combat aircraft.” […]

[The People’s Mosquito chairman John] Lilley said: “No other aircraft has amassed such a remarkable combat record in so short a time, flying so many different types of mission and excelling in each one.

“Even today, it remains one of the world’s most successful multirole combat aircraft, and it was all British, made by men and women who only a few months earlier had been building furniture and mending pianos.”

Despite the great boost the discovery of the archive gives the project, they still have a long ways to go before restoration can begin. Money is the issue. The estimated cost of the restoration is £6 million and only a small portion of that has been raised. If you’d like to pitch in, the People’s Mosquito has some nifty merchandise available in its shop, a club membership with all kinds of perks and takes online donations. 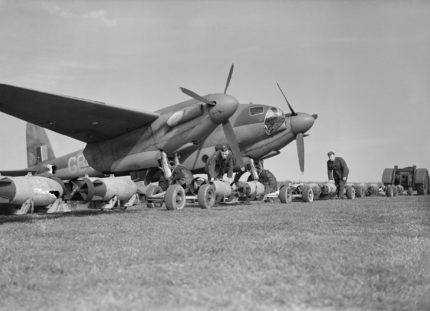